NovaGold Resources Inc. (NYSEAMEX:NG) shares haven’t seen a lot of action during the third quarter. Overall, hedge fund sentiment was unchanged. The stock was in 13 hedge funds’ portfolios at the end of September. At the end of this article we will also compare NG to other stocks including TeleTech Holdings, Inc. (NASDAQ:TTEC), Vanda Pharmaceuticals Inc. (NASDAQ:VNDA), and Viad Corp (NYSE:VVI) to get a better sense of its popularity.

In today’s marketplace there are a large number of formulas investors employ to size up publicly traded companies. A duo of the most underrated formulas are hedge fund and insider trading interest. Our researchers have shown that, historically, those who follow the best picks of the best fund managers can outpace the broader indices by a superb amount (see the details here).

What have hedge funds been doing with NovaGold Resources Inc. (NYSEAMEX:NG)?

At Q3’s end, a total of 13 of the hedge funds tracked by Insider Monkey were bullish on this stock, no change from the second quarter of 2018. Below, you can check out the change in hedge fund sentiment towards NG over the last 13 quarters. With the smart money’s capital changing hands, there exists a select group of noteworthy hedge fund managers who were adding to their holdings meaningfully (or already accumulated large positions). 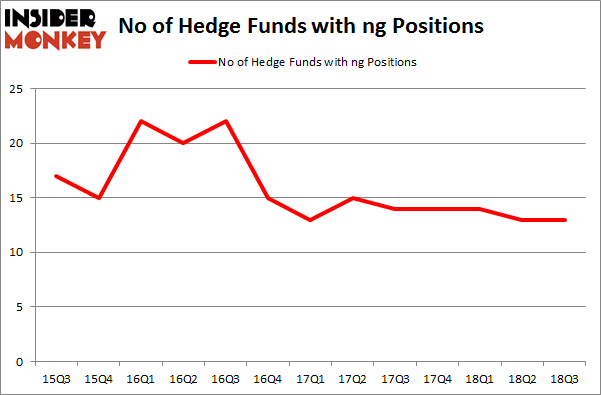 More specifically, Paulson & Co was the largest shareholder of NovaGold Resources Inc. (NYSEAMEX:NG), with a stake worth $81.6 million reported as of the end of September. Trailing Paulson & Co was Baupost Group, which amassed a stake valued at $50 million. MSDC Management, Kopernik Global Investors, and Empyrean Capital Partners were also very fond of the stock, giving the stock large weights in their portfolios.

Due to the fact that NovaGold Resources Inc. (NYSEAMEX:NG) has experienced falling interest from hedge fund managers, logic holds that there lies a certain “tier” of hedge funds that slashed their entire stakes last quarter. It’s worth mentioning that Israel Englander’s Millennium Management dumped the biggest stake of the 700 funds followed by Insider Monkey, comprising about $0.6 million in stock. Matthew Tewksbury’s fund, Stevens Capital Management, also cut its stock, about $0.1 million worth. These moves are interesting, as aggregate hedge fund interest stayed the same (this is a bearish signal in our experience).

As you can see these stocks had an average of 14.25 hedge funds with bullish positions and the average amount invested in these stocks was $144 million. That figure was $179 million in NG’s case. Vanda Pharmaceuticals Inc. (NASDAQ:VNDA) is the most popular stock in this table. On the other hand Amerisafe, Inc. (NASDAQ:AMSF) is the least popular one with only 11 bullish hedge fund positions. NovaGold Resources Inc. (NYSE:NG) is not the least popular stock in this group but hedge fund interest is still below average. This is a slightly negative signal and we’d rather spend our time researching stocks that hedge funds are piling on. In this regard VNDA might be a better candidate to consider a long position.