Hedge Fund Sentiment in Medtronic plc (MDT) Is Above Average

Is Medtronic plc (NYSE:MDT) a good place to invest some of your money right now? We can gain invaluable insight to help us answer that question by studying the investment trends of top investors, who employ world-class Ivy League graduates, who are given immense resources and industry contacts to put their financial expertise to work. The top picks of these firms have historically outperformed the market when we account for known risk factors, making them very valuable investment ideas.

Is Medtronic plc (NYSE:MDT) an attractive investment right now? The smart money is reducing their bets on the stock at the margin. The number of bullish hedge fund positions were cut by 1 in recent months. Our calculations also showed that MDT isn’t among the 30 most popular stocks among hedge funds (see the video at the end of this article). MDT was in 49 hedge funds’ portfolios at the end of the second quarter of 2019. There were 50 hedge funds in our database with MDT positions at the end of the previous quarter.

Unlike some fund managers who are betting on Dow reaching 40000 in a year, our long-short investment strategy doesn’t rely on bull markets to deliver double digit returns. We only rely on hedge fund buy/sell signals. Let’s take a look at the fresh hedge fund action surrounding Medtronic plc (NYSE:MDT).

Heading into the third quarter of 2019, a total of 49 of the hedge funds tracked by Insider Monkey were bullish on this stock, a change of -2% from one quarter earlier. The graph below displays the number of hedge funds with bullish position in MDT over the last 16 quarters. With hedge funds’ positions undergoing their usual ebb and flow, there exists a few noteworthy hedge fund managers who were increasing their stakes substantially (or already accumulated large positions). 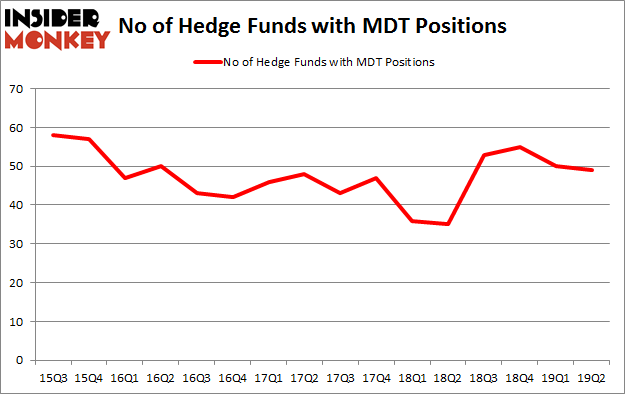 Among these funds, D E Shaw held the most valuable stake in Medtronic plc (NYSE:MDT), which was worth $519.4 million at the end of the second quarter. On the second spot was AQR Capital Management which amassed $429.9 million worth of shares. Moreover, Diamond Hill Capital, Renaissance Technologies, and GLG Partners were also bullish on Medtronic plc (NYSE:MDT), allocating a large percentage of their portfolios to this stock.

Since Medtronic plc (NYSE:MDT) has witnessed declining sentiment from the entirety of the hedge funds we track, it’s safe to say that there is a sect of hedge funds that slashed their positions entirely heading into Q3. It’s worth mentioning that Anand Parekh’s Alyeska Investment Group cut the biggest position of the “upper crust” of funds followed by Insider Monkey, valued at close to $20.5 million in call options, and D. E. Shaw’s D E Shaw was right behind this move, as the fund dumped about $15.4 million worth. These moves are important to note, as total hedge fund interest was cut by 1 funds heading into Q3.

As you can see these stocks had an average of 40 hedge funds with bullish positions and the average amount invested in these stocks was $2338 million. That figure was $2317 million in MDT’s case. Honeywell International Inc. (NYSE:HON) is the most popular stock in this table. On the other hand BHP Group (NYSE:BBL) is the least popular one with only 20 bullish hedge fund positions. Medtronic plc (NYSE:MDT) is not the most popular stock in this group but hedge fund interest is still above average. Our calculations showed that top 20 most popular stocks among hedge funds returned 24.4% in 2019 through September 30th and outperformed the S&P 500 ETF (SPY) by 4 percentage points. Hedge funds were also right about betting on MDT as the stock returned 12.7% during the third quarter and outperformed the market. Hedge funds were rewarded for their relative bullishness.