In short, they love it. Lululemon was owned by 41 of the hedge funds tracked by Insider Monkey’s database as of June 30, up from 34 at the end of March. That ranked it as Hedge Funds’ Favorite Apparel Stock, while it also landed on our list of the 25 Stocks Billionaires Are Piling On (though it didn’t crack the top 10). Lululemon is firing on all cylinders, which is investors have blessed it with nearly 80% gains in 2018. The recent pullback, which was macro-based, could be a golden opportunity for investors to grab discounted shares ahead of a holiday season that Lululemon appears poised to do very well during thanks to enhanced customer acquisition efforts, an expanded international presence, growing e-commerce platform, and new products that are resonating with customers.

What have hedge funds been doing with Lululemon Athletica Inc. (NASDAQ:LULU)? 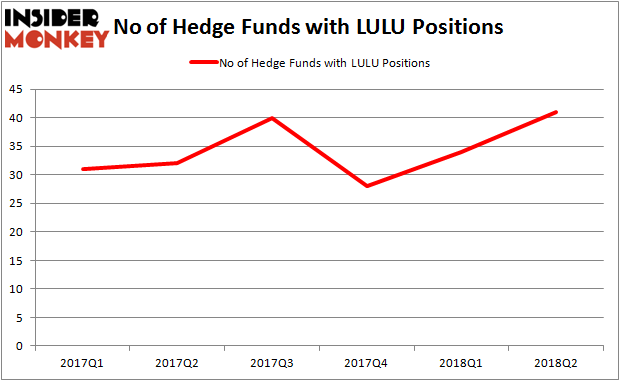 Among these funds, AQR Capital Management held the most valuable stake in Lululemon Athletica Inc. (NASDAQ:LULU), worth $271.2 million at the end of the second quarter. On the second spot was Two Sigma Advisors which had amassed $240.8 million worth of shares. Moreover, Shellback Capital and Laurion Capital Management were also bullish on Lululemon Athletica Inc. (NASDAQ:LULU), allocating a large percentage of their 13F portfolios to this stock.

As aggregate interest increased, key money managers were breaking ground themselves. Hitchwood Capital Management, managed by James Crichton, created the most valuable position in Lululemon Athletica Inc. (NASDAQ:LULU). Hitchwood Capital Management had $43.7 million invested in the company at the end of the second quarter. Louis Navellier’s Navellier & Associates also made a $2.6 million investment in the stock during the quarter. The following funds were also among the new LULU investors: Alexander Mitchell’s Scopus Asset Management, George Hall’s Clinton Group, and Robert Pohly’s Samlyn Capital.

As you can see these stocks had an average of 17 hedge funds with bullish positions and the average amount invested in these stocks was $743 million. That figure was $1.79 billion in LULU’s case. Xilinx, Inc. (NASDAQ:XLNX) is the most popular stock in this table. On the other hand iShares U.S. Preferred Stock ETF (NASDAQ:PFF) is the least popular one with only 4 bullish hedge fund positions. Compared to these stocks Lululemon Athletica Inc. (NASDAQ:LULU) is more popular among hedge funds. Considering that hedge funds can’t get enough of this stock, it may be a good idea to analyze it in detail and potentially include it in your portfolio.