SEC is looking at Soros (NYPost)
The Securities and Exchange Commission is taking Bill Ackman seriously. Days after the hedge-fund mogul wrote the regulator and complained about alleged insider-trading violations by George Soros’ family fund regarding its trading in Herbalife Ltd. (NYSE:HLF), the SEC took action. An SEC lawyer has contacted at least one person who spoke with Soros Fund Management portfolio manager Paul Sohn, who was driving the firm’s Herbalife Ltd. (NYSE:HLF) investment, The Post has learned. Bill Keep, the dean of the College of New Jersey, who is an expert on pyramid schemes, was recently questioned by Liora Sukhatme, a lawyer in the SEC’s enforcement area. 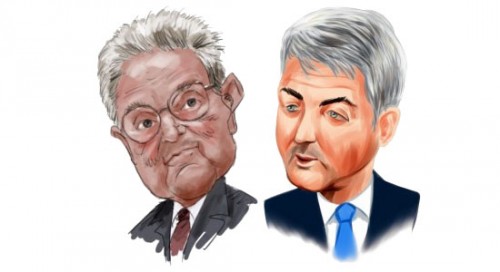 Man Shuts Vision Fund in Overhaul of Guaranteed Products (Bloomberg)
Man Group Plc (EMG), the world’s biggest publicly traded hedge-fund manager, is shutting a range of products that aimed to protect clients from losses after they failed to meet performance targets. The company decided this month to shut Man Vision Ltd., a $40 million pool that sought to generate returns of more than 10 percent annually, according to an Aug. 12 letter sent to clients and obtained by Bloomberg News. Man Group is also closing similar offerings that, like Vision, were tied to the performance of AHL Diversified, the firm’s biggest hedge fund, said a person with knowledge of the moves who asked not to be identified because they aren’t public.

German Chancellor Angela Merkel to ask G20 for stiffer hedge fund regulation (Opalesque)
German Chancellor Angela Merkel has pledged to ask G20 members to impose stiffer regulation against hedge funds during its upcoming meeting on Sept. 5-7, reported Oanda.com. Speaking at a rally in Rhine City at Bonn, Merkell said she would urge members of G20 during their meeting to be held at St. Petersburg to “speak with one voice” as she laments on the slow progress in implementing tighter rules on hedge funds and shadow banking.

Bay Street disruptor Som Seif returns with a purpose (FinancialPost)
Long–time Bay Street disruptor Som Seif is finally making his full return to the investment community. After a quiet launch earlier this year, the pioneer of Canada’s exchange-traded fund industry is rolling out a series of investment products aimed at taking hedge fund and other less-accessible strategies and making them available to the self-directed masses. Starting next Tuesday, Mr. Seif’s encore endeavour, Toronto-based Purpose Investments, will be rolling out five new investment strategies — all managed by Toronto-based hedge fund firm Breton Hill.

Hedge Funders Are All a Little Nuts (WSJ)
Hedge funders are in the news. Carl Icahn tweets about his dinner with Apple Inc. (NASDAQ:AAPL) -2.94% Tim Cook. Dan Loeb tussles with George Clooney. Bill Ackman says Herbalife Ltd. (NYSE:HLF) is a pyramid and shorts the stock; George Soros goes long. If you want to understand the guys who run hedge funds, you first have to realize that they—we—are a little nuts. The trick to running a hedge fund is to drink from the fire hose of information, take it all in, figure out what everyone else knows and then position your portfolio to benefit when everyone else is inevitably wrong. This is no simple feat. Sleepless nights, second guessing, minds racing, almost a split personality working out both sides of all arguments.