Canadian Pacific Railway Ltd.’s (CP) support for Chief Executive Officer Fred Green doesn’t make sense because the company’s performance trails all of its North American peers, the railroad’s largest investor said. “We think the board has chosen the wrong CEO,” William Ackman told shareholders at a meeting in Toronto, where he renewed his call to replace Green with Hunter Harrison, the former head of Canadian National Railway Co. “The results are the worst railroad by a long shot in North America.” 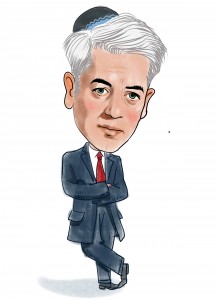 Bill Ackman: Rim Too Risky To Invest In (Value Walk)

“We spent some time looking the company, but we decided against it,” Ackman said in an interview after holding a public meeting in Toronto Monday on the CP Rail proxy battle. “We’re not really technology investors. “We like businesses like the railroad business which aren’t going to go away,” he said. “As much as I like my BlackBerry, there is some risk it’s going to go away. And that’s a risk we don’t want to take with a billion and half dollars.”

See the presentation below and view the webcast here.

There are two lessons to be gleaned from the revelation that Philip Falcone’s Harbinger Capital Partners LLC lost 47 percent in its main hedge fund last year. The first is that Falcone took a mighty gamble in investing $3 billion in LightSquared, a Virginia-based broadband-service supplier. The second, more important point is to shed light on how poorly the U.S. government manages the domestic broadcast spectrum.

Creditors Tennenbaum Capital Partners LLC and Z Capital Partners LLC are poised to take control of Sun Capital Partners Inc.’s Real Mex Restaurants Inc. as part of a reorganization, said two people with knowledge of the talks. JPMorgan Chase & Co., a creditor, also will take a stake in the company, said the people, who asked not to be named because the talks are private. Real Mex, purchased by an affiliate of Sun Capital in 2006 for $359 million, operates the El Torito, Acapulco and Chevys Fresh Mex restaurant chains. It may emerge from bankruptcy under new ownership as early as March, the people said.

Asian hedge funds beat regional equity markets in 2011 for the second year running and saw net inflows of $6.6bn, according to the latest data from Hedge Fund Research (HFR). Total capital rose by 7.5% overall, bringing the total estimated capital to $82.1bn, despite a $1.04bn net outflow in the final quarter, the first quarterly outflow to Asian hedge funds since 1Q10.

Wealthy Chinese investors are turning to “sunshine” private trusts, the prototypes of hedge funds in the communist nation, as the property market cools, stocks slump and bank-deposit rates fail to match inflation. China’s private trust-fund assets tripled to 138.3 billion yuan ($22 billion) in the 18 months to Sept. 30, according to the most recent data from the China Trustee Association, while global hedge-fund assets have stalled at around $2 trillion. The sunshine funds are exempt from some rules placed on Chinese mutual funds, even as limitations such as a ban on short selling means they can’t operate as hedge funds in the same way managers in Hong Kong, London and New York can.

Hedge fund inflows may have been stagnant for much of 2011, but Chinese ‘sunshine’ funds had a brighter outlook. As BusinessWeek/Bloomberg is reporting, Chinese investors piled into the funds — so called because of their transparency in comparison to loosely regulated private funds in the past — to the point that their assets under management grew by threefold to $22 billion as of Sept. 30. Although the sunshine funds world is still much smaller in terms of AUM than hedge funds around the globe (around $2 trillion) they haven’t seen their inflows slow down like traditional hedge funds investment vehicles in recent quarters.

Newt Gingrich has progressively turned up the heat with his rhetoric against Mitt Romney since falling flat in the first two nominating contests this year. It seemed to work when he pulled off an upset in South Carolina, but the former House speaker finished a distant second in the recent Florida and Nevada primaries. His latest Web ad suggests that “ultra-liberal” billionaire George Soros supports both Romney and President Obama.

Last year’s hedge fund losers may be turning into winners again. Several of the largest hedge funds that ended last year deep in the red, jumped to good starts in January, giving their wealthy investors reason to believe savvy traders are getting back their magic touch. Lee Ainslie’s Maverick Capital staged a dramatic rebound, leaping onto the list of top-20 performing funds in January thanks to a 5.89 percent gain in the first weeks of the year. In 2011, he lost 15 percent.

Why Hedge Funds Don’t Live Up To Their Name (Reuters)

In theory, last year should have been a great time to be invested in a hedge fund. With markets gobsmacked by U.S. and euro zone crises, what better way to protect your money than to hedge against the market — the nominal premise behind a hedge fund? Managers can be defensive and pick the sectors or countries that will do well when most of the market is sour. There’s a big catch here: Success depends upon whether managers guess which sector won’t decline or manage to retreat to bonds at the right time.

Caesars Shows Some Tarnish as It Returns to Markets (WSJ)

When Caesars Entertainment Corp. was taken private four years ago in a deal valued at around $28 billion, its investors might never have imagined the company’s return to public markets—expected this week—would be so tepid. After the offering, around 19% of the company could be sold by investors other than TPG and Apollo, as well as 9.9% owned by hedge fund manager Paulson & Co., according to a person familiar with the matter.

A Termination Tempest in a Teapot (Deal Book)

A hedge fund buys a put option on a stock. A few days later, the stock in question tanks, and then is the subject of a brief trading halt. The hedge fund tries to exercise the put, and its counterparty — a major financial institution — says “no.” And then the parties bring the entire matter into court, all over a transaction that involves about $9 million.

Swedish financial services group SEB has merged its $2 billion London-based fund of hedge funds manager Key Asset Management with its alternative investment team in Stockholm. The combined team will be managed by Mikael Spångberg as managing director, Stockholm and Chris Rule as deputy and CIO, London. SEB said in a statement that the two investment teams have worked together informally for the past few years and “bring different specialties to the new venture. Key has one of the oldest track records in the fund of hedge funds industry while the SEB AIT brings competence within the seeding and incubation business.”

CQS has launched a new mortgage-backed securities hedge fund with US$140 million in initial assets. The CQS ABS Alpha Fund debuted this month, Bloomberg News reports. In addition to the initial assets, the fund has another US$60 million in commitments, but CQS told clients that “further inflows will be contingent on market opportunity.”

Corey Ribotsky, facing allegations that he misappropriated more than $1 million from his NIR Group hedge fund, has been dismissed as the fund’s manager.

Hedge Fund Cares, the industry’s child abuse prevention charity, will honor former New York Yankees manager Joe Torre at its annual benefit in March. Torre’s reception of the award recognizes his efforts to end child abuse through his own Safe at Home Foundation, according to a statement by the organization.

The city of Seattle once had a professional basketball team. Now, city officials and a hedge fund manager are reportedly working to make that happen again. The Seattle Times reported on Saturday that San Francisco hedge fund manager Christopher Hansen has been in discussions since last summer with mayoral staff about bringing a NBA team as well as building a new arena for that team.

The SEC announced last week that judgments were entered in a New York federal court against Craig Drimal and David Plate. The SEC had charged Drimal, a former trader who worked out of the offices of hedge fund firm Galleon Management, and Plate, a former trader at the broker-dealer Schottenfeld Group, LLC, with trading on inside information related to corporate acquisitions.

Sergei Magnitsky, a lawyer for Hermitage Capital, tragically died in Russian custody in 2009, and a somewhat official report last year found that police torture contributed to his death. However, despite his death, Magnitsky is still on trial.

Michael Farmer, a wealthy hedge fund tycoon, has been appointed as co-treasurer to the Conservative party, replacing Lord Fink. Mr Farmer is a generous donor to the Tories and has given £2.6m, according to the Electoral Commission’s website. The City financier, known as “Mr Copper”, founded RK Capital Management, whose Red Kite fund is one of the biggest metals hedge funds in the world.

Remember when back in September 2010, David Tepper moved the market by nearly 2% when he told a stunned world that he is “balls to the wall” stocks because no matter what happens, stocks can only go higher (a ludicrous proposition in any other universe except perhaps for this one where the “Greenspan Put” has since been replaced with the “Bernanke Guarantee”). He did out perform the market that year. The next year he lost over 3%. Why? Was it because the Fed did not go through with promises of LSAP (even though it did engage in QE3 curve shifting by ZIRPing the short end in perpetuity, and buying 91% of long-end issuance).

More potentially good news for the hedge fund industry, particularly long/short equity and macro managers, comes from Preqin, whose recent Hedge Fund Spotlight focussed on the $1 billion club and had positive news about hedge fund investors, again interestingly, those from Asia, including Australia. As reported in Damien Hatfield’s Australian Hedge newsletter, global macro investors from Asia are planning to increase their exposure to hedge funds.

Global hedge fund research and investment specialist Financial Risk Management (FRM) has produced its market summary for January 2012 and its outlook for the rest of the year. Over January, FRM reveals that there was a broad-based rally in equity markets with small caps outperforming large caps and growth stocks rallying more than value stocks.

Yahoo!’s Not Hated By Everyone (Forbes)

Yahoo! (YHOO) has to be one of the most hated companies (and boards) among investors today. However, one of the myths that circulated when Dan Loeb announced his position in Yahoo! last September was that Yahoo! has been a graveyard for past hedge fund managers. To be clear, before Loeb, there were two well-known hedge fund managers involved in Yahoo!: Carl Icahn and David Einhorn.

Julie Macklowe: Much more than just the pretty face that often graces the society pages of publications like Vogue Magazine, Julie Macklowe veered off her family’s path in fashion (her father and grandfather both owned clothing firms) and set out for a career in finance. This took her to Seoul and Hong Kong where she structured leveraged buyouts for Chase Capital Management before moving onto Metropolitan Capital Management and then investment firm SAC where she managed portfolios in the retail and consumer sectors. In 2009 she ran her own $250m hedge fund before deciding to leave the financial world behind in 2010.

There has been a surge in mental health illnesses among hedge fund managers and bankers as the financial crisis continues to take its toll. One mental health practitioner Jacqueline Hurst said she had seen a 40% increase in financial professionals seeking help. “Financial services can be an incredibly alpha male environment and often people do not talk about their issues. With the economy the way it is, a lot of these individuals are suffering from severe anxiety and stress and are simply sinking into depression,” she said.

10 Tuesday AM Reads (The Big Picture)