Hedge funds started to disclose their holdings at the end of 2019 in new 13F filings. They have 45 days from the end of each quarter to disclose their positions in publicly traded US stocks, options, and convertible debt. Insider Monkey tracks more than 750 hedge funds and usually more than half of these hedge funds will wait until the last day to file their 13Fs with the SEC. Fortunately, our experience shows that aggregate hedge fund sentiment towards most stocks don’t change much. In this article we are going to take a look at how hedge funds have been feeling about a stock like Microsoft Corporation (NASDAQ:MSFT) and compare its performance against hedge funds’ favorite stocks.

Microsoft Corporation (NASDAQ:MSFT) shareholders have witnessed an increase in enthusiasm from smart money in recent months. MSFT was in 173 hedge funds’ portfolios at the end of September. There were 167 hedge funds in our database with MSFT positions at the end of the previous quarter. Our calculations also showed that MSFT consistently ranked second or third among the 30 most popular stocks among hedge funds (click for Q3 rankings and see the video at the end of this article for Q2 rankings) in 2019.

We leave no stone unturned when looking for the next great investment idea. We read hedge fund investor letters and listen to stock pitches at hedge fund conferences. This December, we recommended Adams Energy as a one-way bet based on an under-the-radar fund manager’s investor letter and the stock is still extremely cheap trading at an enterprise value/operating profit ratio of 1 (this isn’t a typo). In January, we recommended a position in a dividend stock with a PE ratio of less than 7 that is growing its earnings and yields 11%. With all of this in mind we’re going to take a gander at the key hedge fund action regarding Microsoft Corporation (NASDAQ:MSFT).

How have hedgies been trading Microsoft Corporation (NASDAQ:MSFT)? 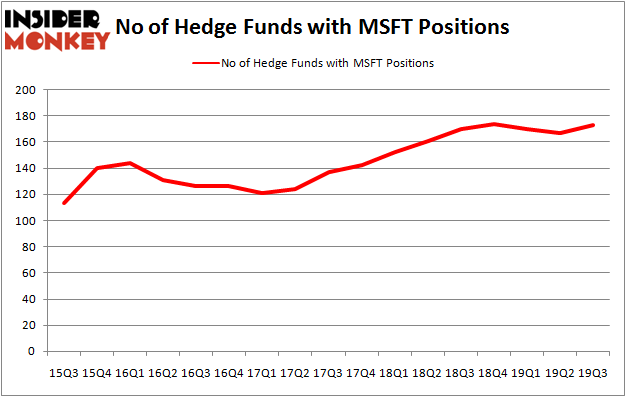 Among these funds, Fisher Asset Management held the most valuable stake in Microsoft Corporation (NASDAQ:MSFT), which was worth $2969.5 million at the end of the third quarter. On the second spot was Eagle Capital Management which amassed $2625.1 million worth of shares. Tiger Global Management, AQR Capital Management, and Adage Capital Management were also very fond of the stock, becoming one of the largest hedge fund holders of the company. In terms of the portfolio weights assigned to each position Joho Capital allocated the biggest weight to Microsoft Corporation (NASDAQ:MSFT), around 21.93% of its 13F portfolio. Duquesne Capital is also relatively very bullish on the stock, earmarking 21.61 percent of its 13F equity portfolio to MSFT.

As one would reasonably expect, some big names were breaking ground themselves. Cryder Capital, managed by Ferdinand Groos, established the biggest position in Microsoft Corporation (NASDAQ:MSFT). Cryder Capital had $90.2 million invested in the company at the end of the quarter. Michael Sidhom’s Immersion Capital also initiated a $84.1 million position during the quarter. The other funds with new positions in the stock are David Fiszel’s Honeycomb Asset Management, Gregg Moskowitz’s Interval Partners, and Joseph Samuels’s Islet Management.

As you can see these stocks had an average of 140.5 hedge funds with bullish positions and the average amount invested in these stocks was $28921 million. That figure was $26910 million in MSFT’s case. Amazon.com, Inc. (NASDAQ:AMZN) is the most popular stock in this table. On the other hand Apple Inc. (NASDAQ:AAPL) is the least popular one with only 111 bullish hedge fund positions. Compared to these stocks Microsoft Corporation (NASDAQ:MSFT) is more popular among hedge funds. Our calculations showed that top 20 most popular stocks among hedge funds returned 41.3% in 2019 and outperformed the S&P 500 ETF (SPY) by 10.1 percentage points. These 20 hedge fund hotels also returned 4.5% in 2020 and beat the market by an additional 3 percentage points. Hedge funds were also right about betting on MSFT as the stock returned 6.6% so far in 2020 and outperformed the market by an even larger margin. Hedge funds were clearly right about piling into this stock relative to other stocks with similar market capitalizations.