Hedge funds started to disclose their holdings at the end of 2019 in new 13F filings. They have 45 days from the end of each quarter to disclose their positions in publicly traded US stocks, options, and convertible debt. Insider Monkey tracks more than 750 hedge funds and usually more than half of these hedge funds will wait until the last day to file their 13Fs with the SEC. Fortunately, our experience shows that aggregate hedge fund sentiment towards most stocks don’t change much. In this article we are going to take a look at how hedge funds have been feeling about a stock like Alphabet Inc (NASDAQ:GOOGL) and compare its performance against hedge funds’ favorite stocks.

Alphabet Inc (NASDAQ:GOOGL) investors should be aware of an increase in hedge fund sentiment of late. GOOGL was in 147 hedge funds’ portfolios at the end of September. There were 129 hedge funds in our database with GOOGL holdings at the end of the previous quarter. Our calculations also showed that GOOGL consistently ranked among the top 5 in our quarterly rankings of the 30 most popular stocks among hedge funds (click for Q3 rankings and see the video at the end of this article for Q2 rankings) in 2019.

We leave no stone unturned when looking for the next great investment idea. We read hedge fund investor letters and listen to stock pitches at hedge fund conferences. This December, we recommended Adams Energy as a one-way bet based on an under-the-radar fund manager’s investor letter and the stock is still extremely cheap trading at an enterprise value/operating profit ratio of 1 (this isn’t a typo). In January, we recommended a position in a dividend stock with a PE ratio of less than 7 that is growing its earnings and yields 11%. Now let’s take a look at the latest hedge fund action surrounding Alphabet Inc (NASDAQ:GOOGL).

What does smart money think about Alphabet Inc (NASDAQ:GOOGL)?

At Q3’s end, a total of 147 of the hedge funds tracked by Insider Monkey were bullish on this stock, a change of 14% from the previous quarter. Below, you can check out the change in hedge fund sentiment towards GOOGL over the last 17 quarters. With hedgies’ sentiment swirling, there exists an “upper tier” of key hedge fund managers who were upping their stakes considerably (or already accumulated large positions). 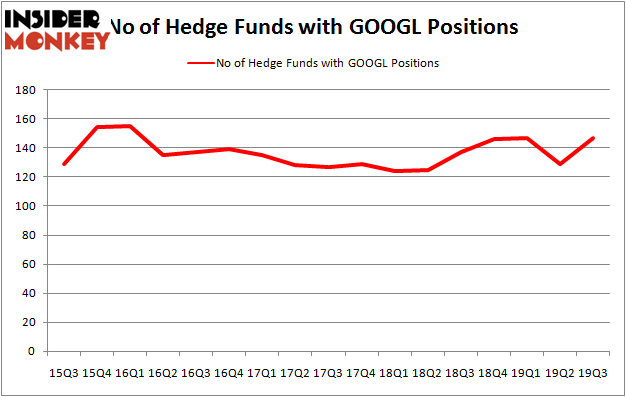 More specifically, Fisher Asset Management was the largest shareholder of Alphabet Inc (NASDAQ:GOOGL), with a stake worth $1794.3 million reported as of the end of September. Trailing Fisher Asset Management was AQR Capital Management, which amassed a stake valued at $952 million. Diamond Hill Capital, Citadel Investment Group, and Adage Capital Management were also very fond of the stock, becoming one of the largest hedge fund holders of the company. In terms of the portfolio weights assigned to each position Thunderbird Partners allocated the biggest weight to Alphabet Inc (NASDAQ:GOOGL), around 22.64% of its 13F portfolio. Brave Warrior Capital is also relatively very bullish on the stock, earmarking 19.14 percent of its 13F equity portfolio to GOOGL.

With a general bullishness amongst the heavyweights, specific money managers have been driving this bullishness. Windacre Partnership, managed by Snehal Amin, established the most valuable position in Alphabet Inc (NASDAQ:GOOGL). Windacre Partnership had $224.2 million invested in the company at the end of the quarter. Brandon Haley’s Holocene Advisors also initiated a $107.4 million position during the quarter. The other funds with new positions in the stock are Michael Sidhom’s Immersion Capital, James Crichton’s Hitchwood Capital Management, and David Fiszel’s Honeycomb Asset Management.

As you can see these stocks had an average of 140.75 hedge funds with bullish positions and the average amount invested in these stocks was $19473 million. That figure was $12322 million in GOOGL’s case. Facebook Inc (NASDAQ:FB) is the most popular stock in this table. On the other hand Berkshire Hathaway Inc. (NYSE:BRK-B) is the least popular one with only 99 bullish hedge fund positions. Alphabet Inc (NASDAQ:GOOGL) is not the most popular stock in this group but that’s because of Facebook’s huge popularity. Our calculations showed that top 20 most popular stocks among hedge funds returned 41.3% in 2019 and outperformed the S&P 500 ETF (SPY) by 10.1 percentage points. Top 20 hedge fund stocks also returned 4.5% so far in 2020 and beat the market by an additional 3 percentage points. Hedge funds were also right about betting on GOOGL as the stock returned 8.8% so far in 2020 and outperformed the market. Hedge funds were rewarded for their relative bullishness.