Many investors, including Paul Tudor Jones or Stan Druckenmiller, have been saying before last year’s Q4 market crash that the stock market is overvalued due to a low interest rate environment that leads to companies swapping their equity for debt and focusing mostly on short-term performance such as beating the quarterly earnings estimates. In the first half of 2019, most investors recovered all of their Q4 losses as sentiment shifted and optimism dominated the US China trade negotiations. Nevertheless, many of the stocks that delivered strong returns in the first half still sport strong fundamentals and their gains were more related to the general market sentiment rather than their individual performance and hedge funds kept their bullish stance. In this article we will find out how hedge fund sentiment to Halliburton Company (NYSE:HAL) changed recently.

Halliburton Company (NYSE:HAL) was in 31 hedge funds’ portfolios at the end of the third quarter of 2019. HAL shareholders have witnessed a decrease in hedge fund interest recently. There were 33 hedge funds in our database with HAL positions at the end of the previous quarter. Our calculations also showed that HAL isn’t among the 30 most popular stocks among hedge funds (click for Q3 rankings and see the video at the end of this article for Q2 rankings).

Today there are several gauges investors employ to size up stocks. Two of the less known gauges are hedge fund and insider trading signals. Our researchers have shown that, historically, those who follow the top picks of the best investment managers can outperform the broader indices by a superb margin (see the details here).

We leave no stone unturned when looking for the next great investment idea. For example Discover is offering this insane cashback card, so we look into shorting the stock. One of the most bullish analysts in America just put his money where his mouth is. He says, “I’m investing more today than I did back in early 2009.” So we check out his pitch. We read hedge fund investor letters and listen to stock pitches at hedge fund conferences. We even check out this option genius’ weekly trade ideas. This December, we recommended Adams Energy as a one-way bet based on an under-the-radar fund manager’s investor letter and the stock already gained 20 percent. With all of this in mind we’re going to take a look at the fresh hedge fund action surrounding Halliburton Company (NYSE:HAL).

How have hedgies been trading Halliburton Company (NYSE:HAL)?

Heading into the fourth quarter of 2019, a total of 31 of the hedge funds tracked by Insider Monkey were long this stock, a change of -6% from the previous quarter. On the other hand, there were a total of 39 hedge funds with a bullish position in HAL a year ago. With hedge funds’ sentiment swirling, there exists a few noteworthy hedge fund managers who were upping their stakes significantly (or already accumulated large positions). 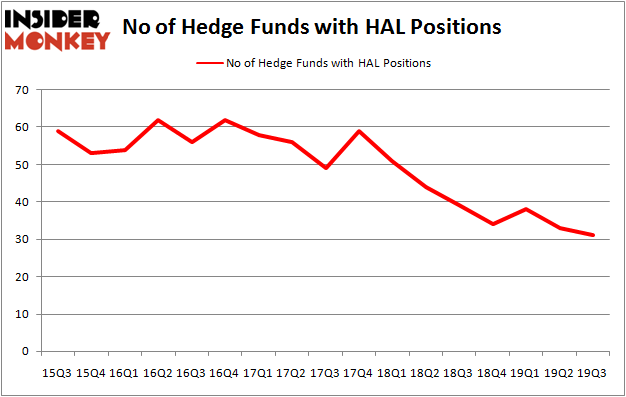 When looking at the institutional investors followed by Insider Monkey, Richard S. Pzena’s Pzena Investment Management has the largest position in Halliburton Company (NYSE:HAL), worth close to $503.2 million, amounting to 2.7% of its total 13F portfolio. Coming in second is Fisher Asset Management, led by Ken Fisher, holding a $61.2 million position; the fund has 0.1% of its 13F portfolio invested in the stock. Some other professional money managers with similar optimism consist of John Overdeck and David Siegel’s Two Sigma Advisors, David E. Shaw’s D E Shaw and Cliff Asness’s AQR Capital Management. In terms of the portfolio weights assigned to each position Pzena Investment Management allocated the biggest weight to Halliburton Company (NYSE:HAL), around 2.74% of its 13F portfolio. Perella Weinberg Partners is also relatively very bullish on the stock, earmarking 0.59 percent of its 13F equity portfolio to HAL.

Since Halliburton Company (NYSE:HAL) has witnessed bearish sentiment from the aggregate hedge fund industry, it’s safe to say that there exists a select few hedge funds who sold off their full holdings heading into Q4. Intriguingly, Steve Cohen’s Point72 Asset Management cut the biggest position of the “upper crust” of funds followed by Insider Monkey, valued at close to $40.8 million in call options, and Robert Pohly’s Samlyn Capital was right behind this move, as the fund dropped about $20 million worth. These bearish behaviors are interesting, as total hedge fund interest was cut by 2 funds heading into Q4.

As you can see these stocks had an average of 29 hedge funds with bullish positions and the average amount invested in these stocks was $809 million. That figure was $817 million in HAL’s case. Laboratory Corp. of America Holdings (NYSE:LH) is the most popular stock in this table. On the other hand Nasdaq, Inc. (NASDAQ:NDAQ) is the least popular one with only 21 bullish hedge fund positions. Halliburton Company (NYSE:HAL) is not the most popular stock in this group but hedge fund interest is still above average. This is a slightly positive signal but we’d rather spend our time researching stocks that hedge funds are piling on. Our calculations showed that top 20 most popular stocks among hedge funds returned 41.1% in 2019 through December 23rd and outperformed the S&P 500 ETF (SPY) by 10.1 percentage points. Unfortunately HAL wasn’t nearly as popular as these 20 stocks and hedge funds that were betting on HAL were disappointed as the stock returned -3.3% in 2019 (through December 23rd) and underperformed the market. If you are interested in investing in large cap stocks with huge upside potential, you should check out the top 20 most popular stocks among hedge funds as many of these stocks already outperformed the market so far this year.