Out of thousands of stocks that are currently traded on the market, it is difficult to identify those that will really generate strong returns. Hedge funds and institutional investors spend millions of dollars on analysts with MBAs and PhDs, who are industry experts and well connected to other industry and media insiders on top of that. Individual investors can piggyback the hedge funds employing these talents and can benefit from their vast resources and knowledge in that way. We analyze quarterly 13F filings of nearly 750 hedge funds and, by looking at the smart money sentiment that surrounds a stock, we can determine whether it has the potential to beat the market over the long-term. Therefore, let’s take a closer look at what smart money thinks about GCI Liberty, Inc. (NASDAQ:GLIBA) and compare its performance to hedge funds’ consensus picks in 2019.

GCI Liberty, Inc. (NASDAQ:GLIBA) investors should pay attention to a decrease in activity from the world’s largest hedge funds lately. GLIBA was in 34 hedge funds’ portfolios at the end of the third quarter of 2019. There were 38 hedge funds in our database with GLIBA positions at the end of the previous quarter. Our calculations also showed that GLIBA isn’t among the 30 most popular stocks among hedge funds (click for Q3 rankings and see the video at the end of this article for Q2 rankings).

In today’s marketplace there are numerous tools stock traders put to use to evaluate stocks. Some of the most underrated tools are hedge fund and insider trading activity. We have shown that, historically, those who follow the best picks of the elite fund managers can beat their index-focused peers by a very impressive amount (see the details here).

We leave no stone unturned when looking for the next great investment idea. For example Discover is offering this insane cashback card, so we look into shorting the stock. One of the most bullish analysts in America just put his money where his mouth is. He says, “I’m investing more today than I did back in early 2009.” So we check out his pitch. We read hedge fund investor letters and listen to stock pitches at hedge fund conferences. We even check out this option genius’ weekly trade ideas. This December, we recommended Adams Energy as a one-way bet based on an under-the-radar fund manager’s investor letter and the stock already gained 20 percent. Now we’re going to analyze the recent hedge fund action regarding GCI Liberty, Inc. (NASDAQ:GLIBA).

At the end of the third quarter, a total of 34 of the hedge funds tracked by Insider Monkey held long positions in this stock, a change of -11% from one quarter earlier. Below, you can check out the change in hedge fund sentiment towards GLIBA over the last 17 quarters. With the smart money’s sentiment swirling, there exists a select group of notable hedge fund managers who were boosting their holdings significantly (or already accumulated large positions). 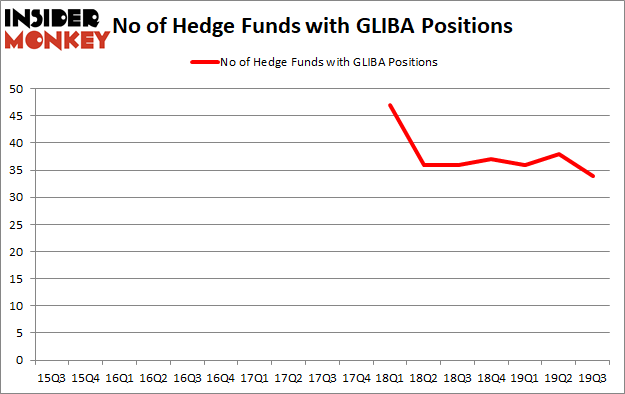 The largest stake in GCI Liberty, Inc. (NASDAQ:GLIBA) was held by FPR Partners, which reported holding $554.7 million worth of stock at the end of September. It was followed by Eagle Capital Management with a $413.2 million position. Other investors bullish on the company included Southeastern Asset Management, D E Shaw, and Tiger Eye Capital. In terms of the portfolio weights assigned to each position Tiger Eye Capital allocated the biggest weight to GCI Liberty, Inc. (NASDAQ:GLIBA), around 31.32% of its 13F portfolio. Manor Road Capital Partners is also relatively very bullish on the stock, earmarking 12.88 percent of its 13F equity portfolio to GLIBA.

Because GCI Liberty, Inc. (NASDAQ:GLIBA) has faced declining sentiment from the aggregate hedge fund industry, logic holds that there was a specific group of money managers who were dropping their full holdings last quarter. Interestingly, Jorge Paulo Lemann’s 3G Capital dropped the biggest investment of all the hedgies followed by Insider Monkey, comprising an estimated $19.2 million in stock. Martin D. Sass’s fund, MD Sass, also dumped its stock, about $14.5 million worth. These transactions are interesting, as aggregate hedge fund interest fell by 4 funds last quarter.

As you can see these stocks had an average of 26.75 hedge funds with bullish positions and the average amount invested in these stocks was $623 million. That figure was $2003 million in GLIBA’s case. Alliance Data Systems Corporation (NYSE:ADS) is the most popular stock in this table. On the other hand Robert Half International Inc. (NYSE:RHI) is the least popular one with only 21 bullish hedge fund positions. GCI Liberty, Inc. (NASDAQ:GLIBA) is not the most popular stock in this group but hedge fund interest is still above average. Our calculations showed that top 20 most popular stocks among hedge funds returned 41.1% in 2019 through December 23rd and outperformed the S&P 500 ETF (SPY) by 10.1 percentage points. Hedge funds were also right about betting on GLIBA as the stock returned 70.4% in 2019 (through December 23rd) and outperformed the market. Hedge funds were rewarded for their relative bullishness.