It is already common knowledge that individual investors do not usually have the necessary resources and abilities to properly research an investment opportunity. As a result, most investors pick their illusory “winners” by making a superficial analysis and research that leads to poor performance on aggregate. Since stock returns aren’t usually symmetrically distributed and index returns are more affected by a few outlier stocks (i.e. the FAANG stocks dominating and driving S&P 500 Index’s returns in recent years), more than 50% of the constituents of the Standard and Poor’s 500 Index underperform the benchmark. Hence, if you randomly pick a stock, there is more than 50% chance that you’d fail to beat the market. At the same time, the 20 most favored S&P 500 stocks by the hedge funds monitored by Insider Monkey generated an outperformance of more than 10 percentage points so far in 2019. Of course, hedge funds do make wrong bets on some occasions and these get disproportionately publicized on financial media, but piggybacking their moves can beat the broader market on average. That’s why we are going to go over recent hedge fund activity in Synovus Financial Corp. (NYSE:SNV).

Synovus Financial Corp. (NYSE:SNV) shares haven’t seen a lot of action during the third quarter. Overall, hedge fund sentiment was unchanged. The stock was in 36 hedge funds’ portfolios at the end of September. The level and the change in hedge fund popularity aren’t the only variables you need to analyze to decipher hedge funds’ perspectives. A stock may witness a boost in popularity but it may still be less popular than similarly priced stocks. That’s why at the end of this article we will examine companies such as Syneos Health, Inc. (NASDAQ:SYNH), Zynga Inc (NASDAQ:ZNGA), and Jabil Inc. (NYSE:JBL) to gather more data points. Our calculations also showed that SNV isn’t among the 30 most popular stocks among hedge funds (click for Q3 rankings and see the video at the end of this article for Q2 rankings).

In the financial world there are many signals market participants use to value publicly traded companies. Two of the most underrated signals are hedge fund and insider trading interest. We have shown that, historically, those who follow the top picks of the top hedge fund managers can beat the broader indices by a solid margin (see the details here).

We leave no stone unturned when looking for the next great investment idea. For example Discover is offering this insane cashback card, so we look into shorting the stock. One of the most bullish analysts in America just put his money where his mouth is. He says, “I’m investing more today than I did back in early 2009.” So we check out his pitch. We read hedge fund investor letters and listen to stock pitches at hedge fund conferences. We even check out this option genius’ weekly trade ideas. This December, we recommended Adams Energy as a one-way bet based on an under-the-radar fund manager’s investor letter and the stock already gained 20 percent. Keeping this in mind we’re going to take a gander at the fresh hedge fund action encompassing Synovus Financial Corp. (NYSE:SNV).

What have hedge funds been doing with Synovus Financial Corp. (NYSE:SNV)?

At the end of the third quarter, a total of 36 of the hedge funds tracked by Insider Monkey held long positions in this stock, a change of 0% from one quarter earlier. The graph below displays the number of hedge funds with bullish position in SNV over the last 17 quarters. With hedge funds’ positions undergoing their usual ebb and flow, there exists a few notable hedge fund managers who were upping their stakes significantly (or already accumulated large positions). 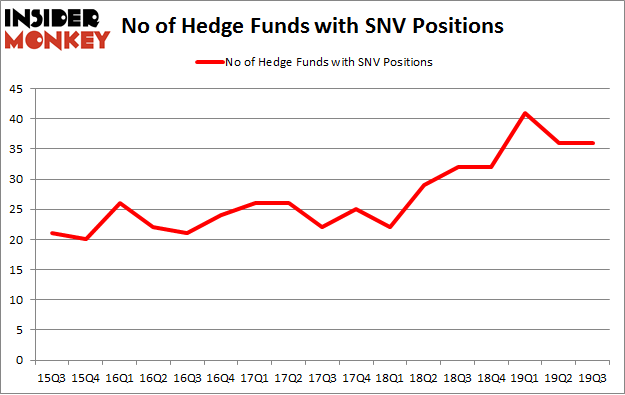 The largest stake in Synovus Financial Corp. (NYSE:SNV) was held by Citadel Investment Group, which reported holding $69.5 million worth of stock at the end of September. It was followed by Two Sigma Advisors with a $50 million position. Other investors bullish on the company included Alyeska Investment Group, Azora Capital, and EJF Capital. In terms of the portfolio weights assigned to each position Azora Capital allocated the biggest weight to Synovus Financial Corp. (NYSE:SNV), around 8.66% of its 13F portfolio. Strycker View Capital is also relatively very bullish on the stock, dishing out 4.59 percent of its 13F equity portfolio to SNV.

Since Synovus Financial Corp. (NYSE:SNV) has experienced bearish sentiment from hedge fund managers, it’s safe to say that there is a sect of hedge funds who sold off their full holdings heading into Q4. At the top of the heap, James Dinan’s York Capital Management dumped the largest investment of the 750 funds monitored by Insider Monkey, totaling about $31.3 million in stock. Bruce Kovner’s fund, Caxton Associates, also said goodbye to its stock, about $7.9 million worth. These bearish behaviors are interesting, as aggregate hedge fund interest stayed the same (this is a bearish signal in our experience).

Let’s check out hedge fund activity in other stocks – not necessarily in the same industry as Synovus Financial Corp. (NYSE:SNV) but similarly valued. We will take a look at Syneos Health, Inc. (NASDAQ:SYNH), Zynga Inc (NASDAQ:ZNGA), Jabil Inc. (NYSE:JBL), and BWX Technologies Inc (NYSE:BWXT). This group of stocks’ market caps are similar to SNV’s market cap.

As you can see these stocks had an average of 27.5 hedge funds with bullish positions and the average amount invested in these stocks was $462 million. That figure was $462 million in SNV’s case. Zynga Inc (NASDAQ:ZNGA) is the most popular stock in this table. On the other hand Syneos Health, Inc. (NASDAQ:SYNH) is the least popular one with only 20 bullish hedge fund positions. Synovus Financial Corp. (NYSE:SNV) is not the most popular stock in this group but hedge fund interest is still above average. This is a slightly positive signal but we’d rather spend our time researching stocks that hedge funds are piling on. Our calculations showed that top 20 most popular stocks among hedge funds returned 41.1% in 2019 through December 23rd and outperformed the S&P 500 ETF (SPY) by 10.1 percentage points. Unfortunately SNV wasn’t nearly as popular as these 20 stocks and hedge funds that were betting on SNV were disappointed as the stock returned 24.9% in 2019 (through December 23rd) and underperformed the market. If you are interested in investing in large cap stocks with huge upside potential, you should check out the top 20 most popular stocks among hedge funds as many of these stocks already outperformed the market so far this year.