EPAM Systems Inc (NYSE:EPAM) investors should pay attention to an increase in enthusiasm from smart money recently. Our calculations also showed that EPAM isn’t among the 30 most popular stocks among hedge funds (click for Q3 rankings and see the video at the end of this article for Q2 rankings).

In the 21st century investor’s toolkit there are a multitude of metrics shareholders can use to evaluate their stock investments. A couple of the most under-the-radar metrics are hedge fund and insider trading indicators. Our researchers have shown that, historically, those who follow the top picks of the best fund managers can outperform their index-focused peers by a solid amount (see the details here).

We leave no stone unturned when looking for the next great investment idea. For example Europe is set to become the world’s largest cannabis market, so we check out this European marijuana stock pitch. We read hedge fund investor letters and listen to stock pitches at hedge fund conferences. This December, we recommended Adams Energy as a one-way bet based on an under-the-radar fund manager’s investor letter and the stock is still extremely cheap despite already gaining 20 percent. With all of this in mind we’re going to take a peek at the recent hedge fund action encompassing EPAM Systems Inc (NYSE:EPAM).

Heading into the fourth quarter of 2019, a total of 24 of the hedge funds tracked by Insider Monkey were bullish on this stock, a change of 4% from the second quarter of 2019. Below, you can check out the change in hedge fund sentiment towards EPAM over the last 17 quarters. With hedge funds’ positions undergoing their usual ebb and flow, there exists an “upper tier” of key hedge fund managers who were boosting their stakes considerably (or already accumulated large positions). 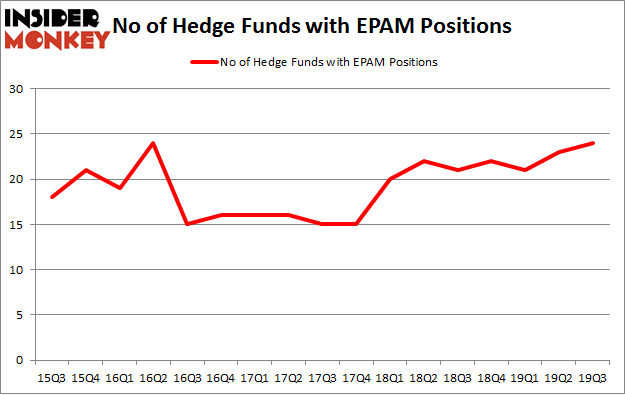 The largest stake in EPAM Systems Inc (NYSE:EPAM) was held by Marshall Wace, which reported holding $113.4 million worth of stock at the end of September. It was followed by GQG Partners with a $73.9 million position. Other investors bullish on the company included AQR Capital Management, Adage Capital Management, and Navellier & Associates. In terms of the portfolio weights assigned to each position Atika Capital allocated the biggest weight to EPAM Systems Inc (NYSE:EPAM), around 1.15% of its 13F portfolio. Navellier & Associates is also relatively very bullish on the stock, setting aside 0.96 percent of its 13F equity portfolio to EPAM.

As one would reasonably expect, key money managers have jumped into EPAM Systems Inc (NYSE:EPAM) headfirst. GQG Partners, managed by Rajiv Jain, initiated the most valuable position in EPAM Systems Inc (NYSE:EPAM). GQG Partners had $73.9 million invested in the company at the end of the quarter. David E. Shaw’s D E Shaw also made a $3.3 million investment in the stock during the quarter. The following funds were also among the new EPAM investors: Perella Weinberg Partners, Matthew Hulsizer’s PEAK6 Capital Management, and Robert B. Gillam’s McKinley Capital Management.

As you can see these stocks had an average of 36 hedge funds with bullish positions and the average amount invested in these stocks was $980 million. That figure was $286 million in EPAM’s case. Carvana Co. (NYSE:CVNA) is the most popular stock in this table. On the other hand Elanco Animal Health Incorporated (NYSE:ELAN) is the least popular one with only 24 bullish hedge fund positions. Compared to these stocks EPAM Systems Inc (NYSE:EPAM) is even less popular than ELAN. Hedge funds clearly dropped the ball on EPAM as the stock delivered strong returns, though hedge funds’ consensus picks still generated respectable returns. Our calculations showed that top 20 most popular stocks among hedge funds returned 41.3% in 2019 and outperformed the S&P 500 ETF (SPY) by 10.1 percentage points. A small number of hedge funds were also right about betting on EPAM as the stock returned 82.9% in 2019 and outperformed the market by an even larger margin.