It has been a fantastic year for equity investors as Donald Trump pressured Federal Reserve to reduce interest rates and finalized the first leg of a trade deal with China. If you were a passive index fund investor, you had seen gains of 31% in your equity portfolio in 2019. However, if you were an active investor putting your money into hedge funds’ favorite stocks, you had seen gains of more than 41%. In this article we are going to take a look at how hedge funds feel about a stock like Elanco Animal Health Incorporated (NYSE:ELAN) and compare its performance against hedge funds’ favorite stocks.

Is Elanco Animal Health Incorporated (NYSE:ELAN) a great stock to buy now? Hedge funds are taking a pessimistic view. The number of long hedge fund bets shrunk by 3 lately. Our calculations also showed that ELAN isn’t among the 30 most popular stocks among hedge funds (click for Q3 rankings and see the video at the end of this article for Q2 rankings). ELAN was in 24 hedge funds’ portfolios at the end of the third quarter of 2019. There were 27 hedge funds in our database with ELAN holdings at the end of the previous quarter.

We leave no stone unturned when looking for the next great investment idea. For example Europe is set to become the world’s largest cannabis market, so we check out this European marijuana stock pitch. We read hedge fund investor letters and listen to stock pitches at hedge fund conferences. This December, we recommended Adams Energy as a one-way bet based on an under-the-radar fund manager’s investor letter and the stock is still extremely cheap despite already gaining 20 percent. With all of this in mind we’re going to take a glance at the recent hedge fund action encompassing Elanco Animal Health Incorporated (NYSE:ELAN). 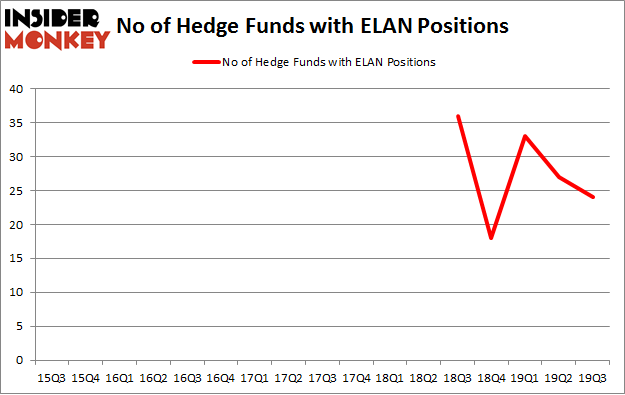 Among these funds, Sirios Capital Management held the most valuable stake in Elanco Animal Health Incorporated (NYSE:ELAN), which was worth $93.3 million at the end of the third quarter. On the second spot was Laurion Capital Management which amassed $61.6 million worth of shares. D E Shaw, Crescent Park Management, and Citadel Investment Group were also very fond of the stock, becoming one of the largest hedge fund holders of the company. In terms of the portfolio weights assigned to each position Sirios Capital Management allocated the biggest weight to Elanco Animal Health Incorporated (NYSE:ELAN), around 6.15% of its 13F portfolio. Crescent Park Management is also relatively very bullish on the stock, setting aside 4.92 percent of its 13F equity portfolio to ELAN.

Since Elanco Animal Health Incorporated (NYSE:ELAN) has experienced falling interest from the entirety of the hedge funds we track, it’s easy to see that there is a sect of fund managers that elected to cut their positions entirely by the end of the third quarter. It’s worth mentioning that Arthur B Cohen and Joseph Healey’s Healthcor Management dropped the biggest position of the 750 funds followed by Insider Monkey, valued at close to $97.3 million in stock. Philip Hilal’s fund, Clearfield Capital, also dropped its stock, about $27.9 million worth. These transactions are interesting, as aggregate hedge fund interest dropped by 3 funds by the end of the third quarter.

As you can see these stocks had an average of 33.25 hedge funds with bullish positions and the average amount invested in these stocks was $771 million. That figure was $359 million in ELAN’s case. Bio-Rad Laboratories, Inc. (NYSE:BIO) is the most popular stock in this table. On the other hand Comerica Incorporated (NYSE:CMA) is the least popular one with only 28 bullish hedge fund positions. Compared to these stocks Elanco Animal Health Incorporated (NYSE:ELAN) is even less popular than CMA. Hedge funds dodged a bullet by taking a bearish stance towards ELAN. Our calculations showed that the top 20 most popular hedge fund stocks returned 41.3% in 2019 and outperformed the S&P 500 ETF (SPY) by 10.1 percentage points. Unfortunately ELAN wasn’t nearly as popular as these 20 stocks (hedge fund sentiment was very bearish); ELAN investors were disappointed as the stock returned -6.6% in 2019 and underperformed the market. If you are interested in investing in large cap stocks with huge upside potential, you should check out the top 20 most popular stocks among hedge funds as 65 percent of these stocks outperformed the market in 2019.