It is already common knowledge that individual investors do not usually have the necessary resources and abilities to properly research an investment opportunity. As a result, most investors pick their illusory “winners” by making a superficial analysis and research that leads to poor performance on aggregate. Since stock returns aren’t usually symmetrically distributed and index returns are more affected by a few outlier stocks (i.e. the FAANG stocks dominating and driving S&P 500 Index’s returns in recent years), more than 50% of the constituents of the Standard and Poor’s 500 Index underperform the benchmark. Hence, if you randomly pick a stock, there is more than 50% chance that you’d fail to beat the market. At the same time, the 20 most favored S&P 500 stocks by the hedge funds monitored by Insider Monkey generated an outperformance of more than 10 percentage points so far in 2019. Of course, hedge funds do make wrong bets on some occasions and these get disproportionately publicized on financial media, but piggybacking their moves can beat the broader market on average. That’s why we are going to go over recent hedge fund activity in LyondellBasell Industries NV (NYSE:LYB).

LyondellBasell Industries NV (NYSE:LYB) was in 31 hedge funds’ portfolios at the end of September. LYB investors should be aware of a decrease in hedge fund sentiment recently. There were 45 hedge funds in our database with LYB holdings at the end of the previous quarter. Our calculations also showed that LYB isn’t among the 30 most popular stocks among hedge funds (click for Q3 rankings and see the video at the end of this article for Q2 rankings).

If you’d ask most stock holders, hedge funds are viewed as worthless, outdated investment tools of the past. While there are over 8000 funds trading at present, Our researchers choose to focus on the leaders of this group, approximately 750 funds. These investment experts oversee most of the smart money’s total asset base, and by observing their top picks, Insider Monkey has identified many investment strategies that have historically exceeded the broader indices. Insider Monkey’s flagship short hedge fund strategy defeated the S&P 500 short ETFs by around 20 percentage points annually since its inception in May 2014. Our portfolio of short stocks lost 27.8% since February 2017 (through November 21st) even though the market was up more than 39% during the same period. We just shared a list of 7 short targets in our latest quarterly update .

We leave no stone unturned when looking for the next great investment idea. For example Discover is offering this insane cashback card, so we look into shorting the stock. One of the most bullish analysts in America just put his money where his mouth is. He says, “I’m investing more today than I did back in early 2009.” So we check out his pitch. We read hedge fund investor letters and listen to stock pitches at hedge fund conferences. We even check out this option genius’ weekly trade ideas. This December, we recommended Adams Energy as a one-way bet based on an under-the-radar fund manager’s investor letter and the stock already gained 20 percent. Keeping this in mind let’s check out the fresh hedge fund action regarding LyondellBasell Industries NV (NYSE:LYB).

At the end of the third quarter, a total of 31 of the hedge funds tracked by Insider Monkey were long this stock, a change of -31% from the second quarter of 2019. On the other hand, there were a total of 39 hedge funds with a bullish position in LYB a year ago. With hedge funds’ capital changing hands, there exists a few notable hedge fund managers who were boosting their holdings significantly (or already accumulated large positions). 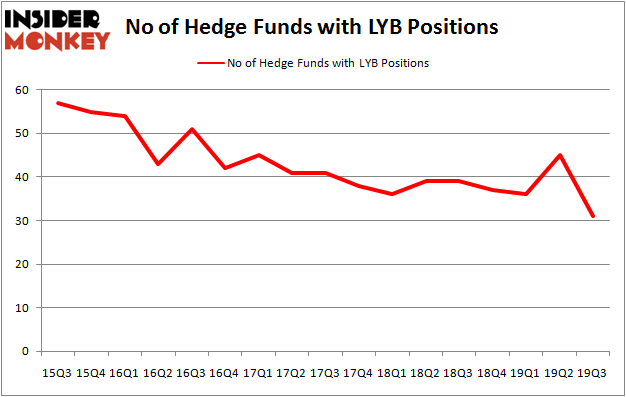 Among these funds, Glenview Capital held the most valuable stake in LyondellBasell Industries NV (NYSE:LYB), which was worth $158.1 million at the end of the third quarter. On the second spot was Soroban Capital Partners which amassed $134.2 million worth of shares. AQR Capital Management, D E Shaw, and Millennium Management were also very fond of the stock, becoming one of the largest hedge fund holders of the company. In terms of the portfolio weights assigned to each position Elm Ridge Capital allocated the biggest weight to LyondellBasell Industries NV (NYSE:LYB), around 4.83% of its 13F portfolio. Soroban Capital Partners is also relatively very bullish on the stock, earmarking 1.89 percent of its 13F equity portfolio to LYB.

Because LyondellBasell Industries NV (NYSE:LYB) has witnessed bearish sentiment from the smart money, it’s easy to see that there is a sect of funds that elected to cut their positions entirely by the end of the third quarter. At the top of the heap, Robert Henry Lynch’s Aristeia Capital cut the biggest investment of the 750 funds tracked by Insider Monkey, valued at an estimated $226.3 million in stock. Peter Rathjens, Bruce Clarke and John Campbell’s fund, Arrowstreet Capital, also cut its stock, about $57.3 million worth. These transactions are interesting, as aggregate hedge fund interest dropped by 14 funds by the end of the third quarter.

As you can see these stocks had an average of 21.5 hedge funds with bullish positions and the average amount invested in these stocks was $723 million. That figure was $502 million in LYB’s case. Ingersoll-Rand Plc (NYSE:IR) is the most popular stock in this table. On the other hand PT Telekomunikasi Indonesia (NYSE:TLK) is the least popular one with only 7 bullish hedge fund positions. LyondellBasell Industries NV (NYSE:LYB) is not the most popular stock in this group but hedge fund interest is still above average. This is a slightly positive signal but we’d rather spend our time researching stocks that hedge funds are piling on. Our calculations showed that top 20 most popular stocks among hedge funds returned 41.1% in 2019 through December 23rd and outperformed the S&P 500 ETF (SPY) by 10.1 percentage points. Unfortunately LYB wasn’t nearly as popular as these 20 stocks and hedge funds that were betting on LYB were disappointed as the stock returned 19.4% in 2019 (through December 23rd) and underperformed the market. If you are interested in investing in large cap stocks with huge upside potential, you should check out the top 20 most popular stocks among hedge funds as many of these stocks already outperformed the market so far this year.