It has been a fantastic year for equity investors as Donald Trump pressured Federal Reserve to reduce interest rates and finalized the first leg of a trade deal with China. If you were a passive index fund investor, you had seen gains of 31% in your equity portfolio in 2019. However, if you were an active investor putting your money into hedge funds’ favorite stocks, you had seen gains of more than 41%. In this article, we are going to take a look at how hedge funds feel about a stock like Bank of America Corporation (NYSE:BAC) and compare its performance against hedge funds’ favorite stocks.

Bank of America Corporation (NYSE:BAC) was in 95 hedge funds’ portfolios at the end of the third quarter of 2019. BAC investors should pay attention to an increase in support from the world’s most elite money managers in recent months. There were 94 hedge funds in our database with BAC holdings at the end of the previous quarter. Our calculations also showed that BAC currently ranks 13th among the 30 most popular stocks among hedge funds (click for Q3 rankings and see the video at the end of this article for Q2 rankings).

We leave no stone unturned when looking for the next great investment idea. For example, Discover is offering this insane cashback card, so we look into shorting the stock. One of the most bullish analysts in America just put his money where his mouth is. He says, “I’m investing more today than I did back in early 2009.” So we check out his pitch. We read hedge fund investor letters and listen to stock pitches at hedge fund conferences. We even check out this option genius’ weekly trade ideas. This December, we recommended Adams Energy as a one-way bet based on an under-the-radar fund manager’s investor letter and the stock already gained 20 percent. With all of this in mind, we’re going to take a look at the new hedge fund action encompassing Bank of America Corporation (NYSE:BAC).

How are hedge funds trading Bank of America Corporation (NYSE:BAC)? 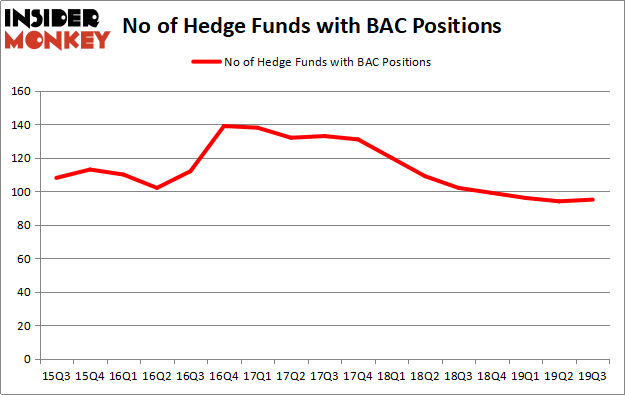 When looking at the institutional investors followed by Insider Monkey, Warren Buffett’s Berkshire Hathaway has the largest position in Bank of America Corporation (NYSE:BAC), worth close to $27.0478 billion, comprising 12.6% of its total 13F portfolio. Sitting at the No. 2 spot is Pzena Investment Management, managed by Richard S. Pzena, which holds a $420.4 million position; 2.3% of its 13F portfolio is allocated to the stock. Some other peers with similar optimism encompass Patrick Degorce’s Theleme Partners, Robert Rodriguez, and Steven Romick’s First Pacific Advisors and Robert Pitts’s Steadfast Capital Management. In terms of the portfolio weights assigned to each position, Ogborne Capital allocated the biggest weight to Bank of America Corporation (NYSE:BAC), around 40.66% of its 13F portfolio. Theleme Partners is also relatively very bullish on the stock, dishing out 18.75 percent of its 13F equity portfolio to BAC.

With a general bullishness amongst the heavyweights, key money managers were leading the bulls’ herd. Tontine Asset Management, managed by Jeffrey Gendell, assembled the most outsized call position in Bank of America Corporation (NYSE:BAC). Tontine Asset Management had $40.8 million invested in the company at the end of the quarter. Josh Donfeld and David Rogers’s Castle Hook Partners also made a $19.4 million investment in the stock during the quarter. The other funds with new positions in the stock are Kevin D. Eng’s Columbus Hill Capital Management, Curtis Schenker and Craig Effron’s Scoggin, and Ken Heebner’s Capital Growth Management.

As you can see these stocks had an average of 68.25 hedge funds with bullish positions and the average amount invested in these stocks was $4030 million. That figure was $32050 million in BAC’s case. The Walt Disney Company (NYSE:DIS) is the most popular stock in this table. On the other hand Taiwan Semiconductor Mfg. Co. Ltd. (NYSE:TSM) is the least popular one with only 52 bullish hedge fund positions. Bank of America Corporation (NYSE:BAC) is not the most popular stock in this group but hedge fund interest is still above average. Our calculations showed that top 20 most popular stocks among hedge funds returned 41.1% in 2019 through December 23rd and outperformed the S&P 500 ETF (SPY) by 10.1 percentage points. Hedge funds were also right about betting on BAC as the stock returned 46% in 2019 (through December 23rd) and outperformed the market. Hedge funds were rewarded for their relative bullishness.