Harley-Davidson, Inc. (HOG): Are Hedge Funds Right About This Stock?

Is Harley-Davidson, Inc. (NYSE:HOG) a cheap investment right now? The smart money is getting more optimistic. The number of bullish hedge fund bets rose by 3 recently. Our calculations also showed that HOG isn’t among the 30 most popular stocks among hedge funds. HOG was in 20 hedge funds’ portfolios at the end of the third quarter of 2018. There were 17 hedge funds in our database with HOG holdings at the end of the previous quarter.

At the moment there are several signals shareholders use to evaluate their holdings. A pair of the most underrated signals are hedge fund and insider trading sentiment. Our experts have shown that, historically, those who follow the top picks of the top hedge fund managers can outperform the S&P 500 by a significant margin (see the details here).

At Q3’s end, a total of 20 of the hedge funds tracked by Insider Monkey were bullish on this stock, a change of 18% from one quarter earlier. On the other hand, there were a total of 20 hedge funds with a bullish position in HOG at the beginning of this year. With the smart money’s sentiment swirling, there exists an “upper tier” of noteworthy hedge fund managers who were increasing their holdings meaningfully (or already accumulated large positions). 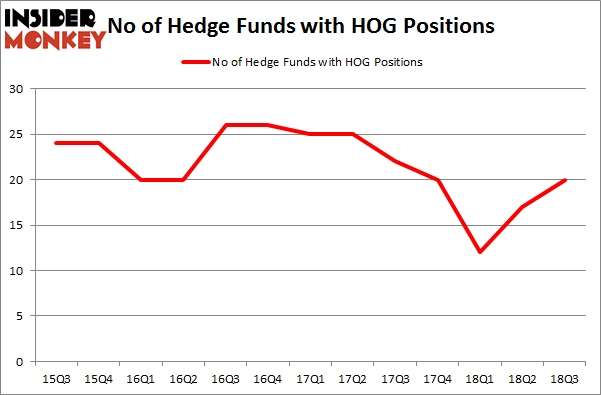 The largest stake in Harley-Davidson, Inc. (NYSE:HOG) was held by Armistice Capital, which reported holding $37.3 million worth of stock at the end of September. It was followed by Millennium Management with a $31.8 million position. Other investors bullish on the company included Balyasny Asset Management, Citadel Investment Group, and Gotham Asset Management.

As industrywide interest jumped, key hedge funds were leading the bulls’ herd. Millennium Management, managed by Israel Englander, created the most valuable position in Harley-Davidson, Inc. (NYSE:HOG). Millennium Management had $31.8 million invested in the company at the end of the quarter. Jim Simons’s Renaissance Technologies also initiated a $5.5 million position during the quarter. The other funds with new positions in the stock are Clint Carlson’s Carlson Capital, Thomas E. Claugus’s GMT Capital, and Frederick DiSanto’s Ancora Advisors.

As you can see these stocks had an average of 34.75 hedge funds with bullish positions and the average amount invested in these stocks was $1.28 billion. That figure was $154 million in HOG’s case. Zendesk Inc (NYSE:ZEN) is the most popular stock in this table. On the other hand World Wrestling Entertainment, Inc. (NYSE:WWE) is the least popular one with only 24 bullish hedge fund positions. Compared to these stocks Harley-Davidson, Inc. (NYSE:HOG) is even less popular than WWE. Considering that hedge funds aren’t fond of this stock in relation to other companies analyzed in this article, it may be a good idea to analyze it in detail and understand why the smart money isn’t behind this stock. This isn’t necessarily bad news. Although it is possible that hedge funds may think the stock is overpriced and view the stock as a short candidate, they may not be very familiar with the bullish thesis. In either case more research is warranted.