Blood collecting, testing, and treatments are key components of the healthcare system. Therefore, can healthcare investors follow a blood trail across several blood-related companies to unveil some interesting investment opportunities? 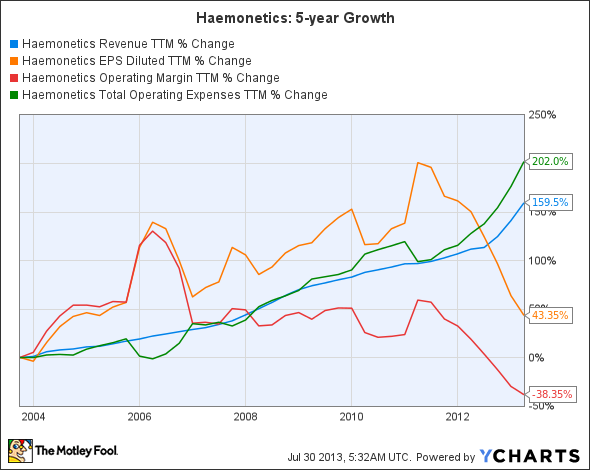 Most of that decline was attributed to restructuring and integration expenses from acquiring so many businesses over the past decade. Investors appear to remain divided as to whether or not Haemonetics can bounce back quickly from all this added weight to its bottom-line, but the bears came out in full force on July 29, sending shares down nearly 8% after the company announced its first quarter earnings.

For its first quarter, Haemonetics Corporation (NYSE:HAE) reported a loss of $0.15 per share, down from a profit from $0.19 it reported in the prior year quarter. Adjusted earnings came in at $0.46 per share – a solid 48.4% year-on-year gain that still fell short of the consensus estimate by a penny. Revenue rose 24.4% to $219.50 million, missing the analysts’ expectations of $232.98 million.

Haemonetics attributed the miss to a shift in order timing, foreign exchange impacts, a loss of major European customer, and the conversion of its distributor business in Australia and New Zealand to direct sales. However, if Haemonetics Corporation (NYSE:HAE) can weather these short-term headwinds and successfully integrate its acquired businesses, its expenses should eventually decrease and its bottom-line will start growing again.

Whereas Haemonetics is intent on dominating the market for blood collection, Cerus Corporation (NASDAQ:CERS) holds a comfortable niche market in blood testing with its INTERCEPT Blood System. Cerus Corporation (NASDAQ:CERS)’ INTERCEPT system increases blood safety by sending in platelets to inactivate pathogens in donated blood intended for transfusions. The system is considered superior to other methods of testing donated blood, since it selectively targets nucleic acids, with a 100% inactivation rate of harmful leukocytes and other pathogens. 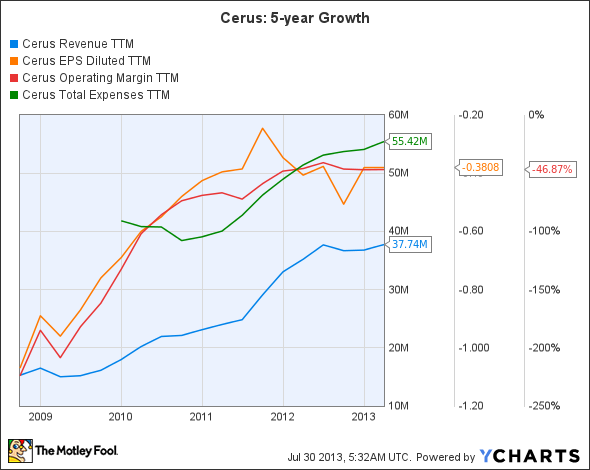 Despite the massive potential of its technology, Cerus Corporation (NASDAQ:CERS) is still an unprofitable small-cap company with shaky fundamentals. It currently only generates revenue from the EU, CIS and Middle East regions.

However, Cerus Corporation (NASDAQ:CERS) recently signed two agreements with the U.S. FDA to start modular submissions for the proposed Premarket Approval (PMA) of its INTERCEPT platelets and plasma without performing additional clinical trials. Both PMA filings could complete next year, with the approval and launch of the product for mass market use coming in the second half of fiscal 2014.

If Cerus’ platelets and plasma are released in the United States, the company’s annual revenue could immediately double to approximately $930 million. More importantly, Cerus Corporation (NASDAQ:CERS)’ approval in the United States would open the door to faster approvals in Asia and the rest of the world, which could increase the market size to $1.69 billion, according to analyst projections.