What’s faster than a speeding cable Internet connection, and able to leap between mobile computing and old-school TV in a single bound? If you ask Google Inc (NASDAQ:GOOG), the answer’s simple: lightning-fast fiber-optic Internet service.

As it stands, broad access to Google’s service has been limited to the greater Kansas City area, so Fiber’s been little more than an intriguing notion. But with news that Austin, Texas, is next up on Google Fiber’s hit parade, the prospects are becoming intriguing that Google could build an entirely new source of revenue and turn the Internet industry upside down.

Austin, here we come
The official announcement that Fiber is coming to Austin was supposed to be a closely guarded secret, but that didn’t last long. A local news outlet leaked the story a week ago that Google Inc (NASDAQ:GOOG) Fiber was going to be the subject of the joint press conference with Google and Austin Mayor Lee Leffingwell. Austin seems like a natural for Fiber, since it’s widely viewed as a domestic hotbed of IT. Beginning in mid-2014, local residents will be able to choose Internet 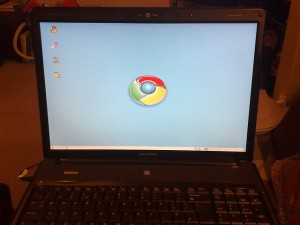 service for $70 a month, or $120 a month with Fiber TV service, at connection speeds 100 times faster than cable, according to Google.

With two new Fiber announcements in a matter of weeks — the service is also expanding to Olathe, Kan. — it appears Google Fiber is ramping up after its K.C.-area beta test. Though most industry insiders don’t believe Google intends to take over the Internet connectivity market, Google CFO Patrick Pichette did say, “We really think that we should be making business — a good business — with this opportunity [Fiber], and we’re going to continue to look at the possibility of expanding.” Investors and Google Inc (NASDAQ:GOOG) shareholders should like the sound of that; more revenue streams mean less reliance on Internet advertising.

Cable companies must be scared, right?
Are cable Internet providers concerned about the threat posed by Google Fiber? If so, they aren’t showing it yet. It’s probably just a coincidence that my cable provider, Comcast Corporation (NASDAQ:CMCSA), recently offered to crank up my Internet connectivity speed at no charge. That’s right — a cable company opted to improve service without charging. Interesting.

Time Warner Cable Inc (NYSE:TWC), Comcast, and Charter Communications, Inc.(NASDAQ:CHTR), have all been on the other side of the Internet subscriber fence. Phone companies such as AT&T Inc. (NYSE:T) and Verizon Communications Inc. (NYSE:VZ) began losing customers to these and other cable Internet providers some time ago, largely because of speed and connectivity issues. And now along comes Google Fiber with an alternative that blows the doors off anything Comcast, Time Warner, or Charter can offer, and often for the same or less money. If the cable industry isn’t worried, it should be.