Shares of online restaurant reservation service OpenTable Inc (NASDAQ:OPEN) have been on fire since the beginning of May, after the San Francisco, California-based company reported first quarter earnings that topped analyst expectations.

Due to its categorization as a social media stock, OpenTable is often mentioned in the same breath as Yelp Inc (NYSE:YELP) and Groupon Inc (NASDAQ:GRPN). Yet I believe that OpenTable is a superior investment to either of these companies, since it is better equipped to survive a rapidly changing mobile market that is increasingly dominated by Google Inc (NASDAQ:GOOG) and Facebook Inc (NASDAQ:FB).

While bears suggest that OpenTable’s trailing P/E of 62 and its year-to-date price surge of 80% indicate that a bubble is forming, I believe that this growth stock still has room to run. Let’s break down the company’s primary facts and figures.

For its first quarter, OpenTable Inc (NASDAQ:OPEN) reported non-GAAP adjusted earnings of $0.45 per share, up 13% from the prior year quarter and topping the consensus estimate by two cents. GAAP-adjusted earnings surged 43% year-on-year to $0.30 per share.

OpenTable’s top line rose 16% to $45.5 million, also beating expectations. The majority of its revenue, $39.4 million, was generated in North America, while the rest came from overseas markets in Europe, Asia, Latin America and Dubai. Seated diners in North America increased 24% year-on-year to 34.3 million, while seated diners in international markets climbed 37% to 3.1 million. CEO Matt Roberts stated that a third of its North America reservations originated from its mobile apps.

During the quarter, OpenTable Inc (NASDAQ:OPEN)’s margins increased across the board.

All these margin improvements suggest that the company is operating at peak efficiency, and points to stronger profit growth in the coming year. In addition, the company’s free cash flow and cash reserves are growing at healthy rates, while it still has no long-term debt. 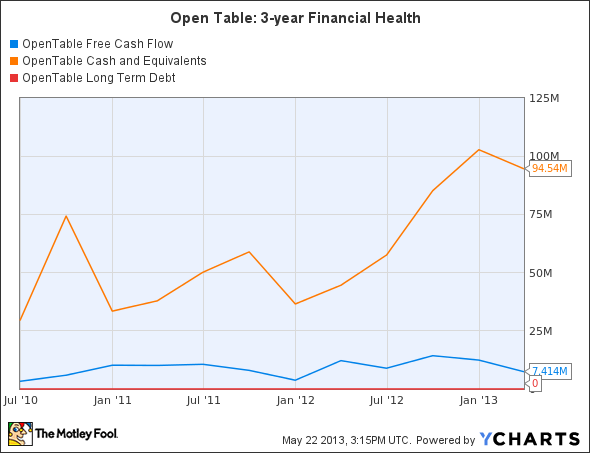 OpenTable Inc (NASDAQ:OPEN) was founded in 1998, and it started operating in 1999 with a limited selection of San Francisco restaurants. The service was later expanded to more than 25,000 restaurants across most of the United States, and several international cities. While the service is free for end users, the company charges restaurants monthly and per-reservation fees for a listing and access to its system.