Is Goldman Sachs Group, Inc. (NYSE:GS) the right pick for your portfolio? Hedge funds are reducing their bets on the stock. The number of bullish hedge fund positions fell by 15 in recent months though overall hedge fund sentiment is still quite bullish, just not as bullish as before. Our calculations also showed that GS isn’t among the 30 most popular stocks among hedge funds (see the video below). GS was in 61 hedge funds’ portfolios at the end of the second quarter of 2019. There were 76 hedge funds in our database with GS holdings at the end of the previous quarter.

Unlike some fund managers who are betting on Dow reaching 40000 in a year, our long-short investment strategy doesn’t rely on bull markets to deliver double digit returns. We only rely on hedge fund buy/sell signals. Let’s take a look at the new hedge fund action regarding Goldman Sachs Group, Inc. (NYSE:GS). 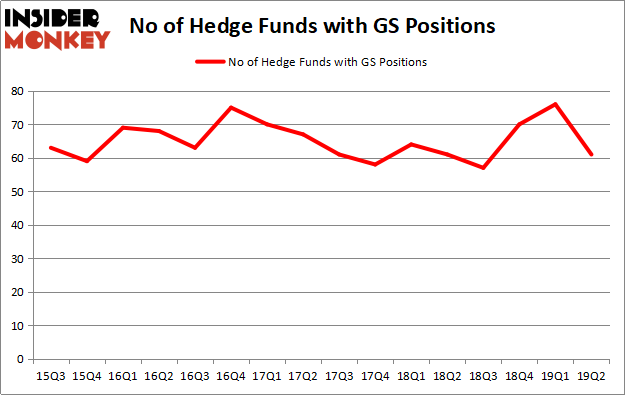 More specifically, Berkshire Hathaway was the largest shareholder of Goldman Sachs Group, Inc. (NYSE:GS), with a stake worth $3755.2 million reported as of the end of March. Trailing Berkshire Hathaway was Eagle Capital Management, which amassed a stake valued at $1417.3 million. Greenhaven Associates, Citadel Investment Group, and Pzena Investment Management were also very fond of the stock, giving the stock large weights in their portfolios.

Because Goldman Sachs Group, Inc. (NYSE:GS) has experienced a decline in interest from the smart money, logic holds that there were a few hedge funds that slashed their positions entirely heading into Q3. Intriguingly, Steven Tananbaum’s GoldenTree Asset Management dropped the largest investment of all the hedgies followed by Insider Monkey, worth an estimated $41.9 million in stock, and Benjamin A. Smith’s Laurion Capital Management was right behind this move, as the fund said goodbye to about $15.9 million worth. These moves are interesting, as aggregate hedge fund interest dropped by 15 funds heading into Q3.

As you can see these stocks had an average of 38.5 hedge funds with bullish positions and the average amount invested in these stocks was $2758 million. That figure was $8201 million in GS’s case. Morgan Stanley (NYSE:MS) is the most popular stock in this table. On the other hand Ambev SA (NYSE:ABEV) is the least popular one with only 16 bullish hedge fund positions. Compared to these stocks Goldman Sachs Group, Inc. (NYSE:GS) is more popular among hedge funds. Our calculations showed that top 20 most popular stocks among hedge funds returned 24.4% in 2019 through September 30th and outperformed the S&P 500 ETF (SPY) by 4 percentage points. Hedge funds were also right about betting on GS, though not to the same extent, as the stock returned 1.9% during the third quarter and outperformed the market as well.