Hedge fund interest in Glaukos Corporation (NYSE:GKOS) shares was flat at the end of last quarter. This is usually a negative indicator. At the end of this article we will also compare GKOS to other stocks including Lithia Motors Inc (NYSE:LAD), Vonage Holdings Corp. (NYSE:VG), and TC Pipelines, LP (NYSE:TCP) to get a better sense of its popularity. 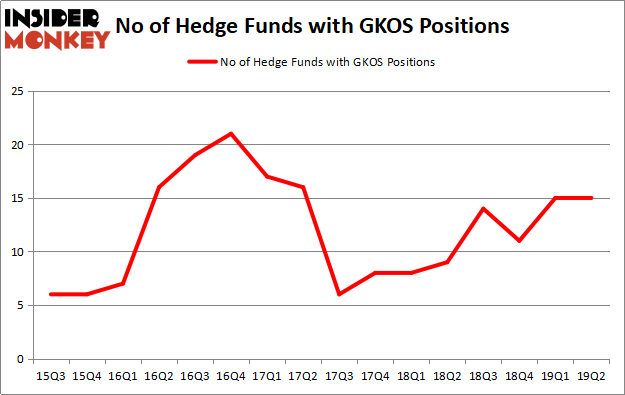 The largest stake in Glaukos Corporation (NYSE:GKOS) was held by Renaissance Technologies, which reported holding $13.2 million worth of stock at the end of March. It was followed by Point72 Asset Management with a $11.3 million position. Other investors bullish on the company included Citadel Investment Group, D E Shaw, and GLG Partners.

Because Glaukos Corporation (NYSE:GKOS) has witnessed bearish sentiment from hedge fund managers, it’s easy to see that there exists a select few fund managers that elected to cut their full holdings heading into Q3. Intriguingly, James E. Flynn’s Deerfield Management dropped the biggest stake of the “upper crust” of funds monitored by Insider Monkey, comprising an estimated $17.9 million in stock, and Brian Ashford-Russell and Tim Woolley’s Polar Capital was right behind this move, as the fund dumped about $10.6 million worth. These transactions are important to note, as aggregate hedge fund interest stayed the same (this is a bearish signal in our experience).

As you can see these stocks had an average of 19.25 hedge funds with bullish positions and the average amount invested in these stocks was $357 million. That figure was $65 million in GKOS’s case. Vonage Holdings Corp. (NYSE:VG) is the most popular stock in this table. On the other hand TC Pipelines, LP (NYSE:TCP) is the least popular one with only 5 bullish hedge fund positions. Glaukos Corporation (NYSE:GKOS) is not the least popular stock in this group but hedge fund interest is still below average. This is a slightly negative signal and we’d rather spend our time researching stocks that hedge funds are piling on. Our calculations showed that top 20 most popular stocks among hedge funds returned 24.4% in 2019 through September 30th and outperformed the S&P 500 ETF (SPY) by 4 percentage points. Unfortunately GKOS wasn’t nearly as popular as these 20 stocks (hedge fund sentiment was quite bearish); GKOS investors were disappointed as the stock returned -17.1% during the third quarter and underperformed the market. If you are interested in investing in large cap stocks with huge upside potential, you should check out the top 20 most popular stocks among hedge funds as many of these stocks already outperformed the market so far in 2019.