Before we spend days researching a stock idea we’d like to take a look at how hedge funds and billionaire investors recently traded that stock. S&P 500 Index ETF (SPY) lost 8.7% through October 26th. Forty percent of the S&P 500 constituents were down more than 10%. The average return of a randomly picked stock in the index is -9.5%. This means you (or a monkey throwing a dart) have less than an even chance of beating the market by randomly picking a stock. On the other hand, the top 25 most popular S&P 500 stocks among hedge funds had an average loss of 8.8%. In this article, we will take a look at what hedge funds think about Gentex Corporation (NASDAQ:GNTX).

Is Gentex Corporation (NASDAQ:GNTX) a superb investment right now? Investors who are in the know are getting more optimistic. The number of long hedge fund positions inched up by 1 in recent months. Our calculations also showed that GNTX isn’t among the 30 most popular stocks among hedge funds.

In the financial world there are tons of metrics investors put to use to value publicly traded companies. Two of the less known metrics are hedge fund and insider trading interest. We have shown that, historically, those who follow the top picks of the top investment managers can outclass the S&P 500 by a healthy amount (see the details here). 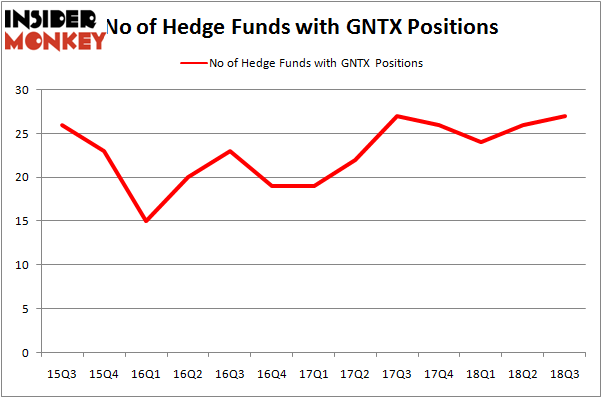 Among these funds, Royce & Associates held the most valuable stake in Gentex Corporation (NASDAQ:GNTX), which was worth $68.7 million at the end of the third quarter. On the second spot was Nitorum Capital which amassed $45.3 million worth of shares. Moreover, Adage Capital Management, Millennium Management, and D E Shaw were also bullish on Gentex Corporation (NASDAQ:GNTX), allocating a large percentage of their portfolios to this stock.

View table here if you experience formatting issues.
As you can see these stocks had an average of 28 hedge funds with bullish positions and the average amount invested in these stocks was $457 million. That figure was $313 million in GNTX’s case. Newfield Exploration Co. (NYSE:NFX) is the most popular stock in this table. On the other hand Lazard Ltd (NYSE:LAZ) is the least popular one with only 17 bullish hedge fund positions. Gentex Corporation (NASDAQ:GNTX) is not the least popular stock in this group but hedge fund interest is still below average. This is a slightly negative signal and we’d rather spend our time researching stocks that hedge funds are piling on. In this regard NFX might be a better candidate to consider a long position.