Before we spend days researching a stock idea we like to take a look at how hedge funds and billionaire investors recently traded that stock. Russell 2000 ETF (IWM) lagged the larger S&P 500 ETF (SPY) by more than 10 percentage points since the end of the third quarter of 2018. This means hedge funds that are allocating a higher percentage of their portfolio to small-cap stocks were probably underperforming the market. However, this also means that as small-cap stocks start to mean revert, these hedge funds will start delivering better returns than the S&P 500 Index funds. In this article, we will take a look at what hedge funds think about GDS Holdings Limited (NASDAQ:GDS).

Is GDS Holdings Limited (NASDAQ:GDS) ready to rally soon? Prominent investors are turning less bullish. The number of long hedge fund bets were trimmed by 5 in recent months after hitting its all time high at the end of March. Our calculations also showed that GDS isn’t among the 30 most popular stocks among hedge funds (see the video below).

At the end of the second quarter, a total of 28 of the hedge funds tracked by Insider Monkey held long positions in this stock, a change of -15% from one quarter earlier. By comparison, 19 hedge funds held shares or bullish call options in GDS a year ago. With the smart money’s positions undergoing their usual ebb and flow, there exists a select group of notable hedge fund managers who were adding to their holdings considerably (or already accumulated large positions). 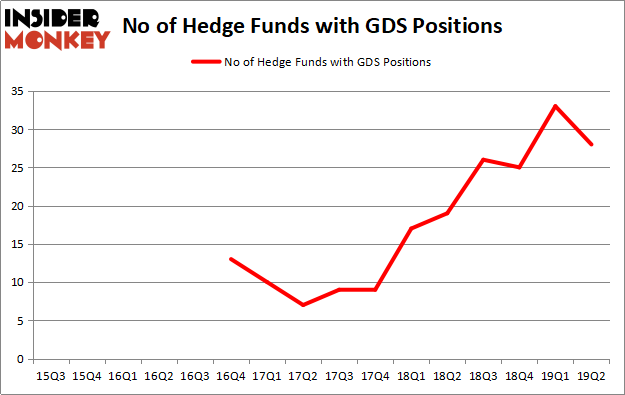 When looking at the institutional investors followed by Insider Monkey, 12 West Capital Management, managed by Joel Ramin, holds the biggest position in GDS Holdings Limited (NASDAQ:GDS). 12 West Capital Management has a $411.1 million position in the stock, comprising 30.9% of its 13F portfolio. Sitting at the No. 2 spot is Tiger Global Management LLC, managed by Chase Coleman, which holds a $215.3 million position; the fund has 1.2% of its 13F portfolio invested in the stock. Remaining members of the smart money that hold long positions include Glen Kacher’s Light Street Capital, Ted Kang’s Kylin Management and Roberto Mignone’s Bridger Management.

Due to the fact that GDS Holdings Limited (NASDAQ:GDS) has faced declining sentiment from the aggregate hedge fund industry, it’s safe to say that there exists a select few money managers who were dropping their positions entirely by the end of the second quarter. Intriguingly, Rob Citrone’s Discovery Capital Management dropped the biggest stake of the 750 funds followed by Insider Monkey, worth an estimated $16.8 million in stock. Israel Englander’s fund, Millennium Management, also dumped its stock, about $16.4 million worth. These moves are interesting, as total hedge fund interest dropped by 5 funds by the end of the second quarter.

As you can see these stocks had an average of 20.75 hedge funds with bullish positions and the average amount invested in these stocks was $336 million. That figure was $1106 million in GDS’s case. Armstrong World Industries, Inc. (NYSE:AWI) is the most popular stock in this table. On the other hand Southwest Gas Corporation (NYSE:SWX) is the least popular one with only 16 bullish hedge fund positions. GDS Holdings Limited (NASDAQ:GDS) is not the most popular stock in this group but hedge fund interest is still above average. Our calculations showed that top 20 most popular stocks among hedge funds returned 24.4% in 2019 through September 30th and outperformed the S&P 500 ETF (SPY) by 4 percentage points. Hedge funds were also right about betting on GDS as the stock returned 6.7% during the third quarter and outperformed the market. Hedge funds were rewarded for their relative bullishness.