The latest 13F reporting period has come and gone, and Insider Monkey is again at the forefront when it comes to making use of this gold mine of data. We have processed the filings of the more than 700 world-class investment firms that we track and now have access to the collective wisdom contained in these filings, which are based on their September 30 holdings, data that is available nowhere else. Should you consider GCI Liberty, Inc. (NASDAQ:GLIBA) for your portfolio? We’ll look to this invaluable collective wisdom for the answer.

GCI Liberty, Inc. (NASDAQ:GLIBA) investors should pay attention to a decrease in activity from the world’s largest hedge funds in recent months. GLIBA was in 34 hedge funds’ portfolios at the end of September. There were 38 hedge funds in our database with GLIBA positions at the end of the previous quarter. Our calculations also showed that GLIBA isn’t among the 30 most popular stocks among hedge funds (click for Q3 rankings and see the video below for Q2 rankings).

At the moment there are tons of gauges stock market investors use to appraise their stock investments. A couple of the best gauges are hedge fund and insider trading interest. Our researchers have shown that, historically, those who follow the top picks of the top fund managers can outclass the S&P 500 by a significant amount (see the details here).

Unlike the largest US hedge funds that are convinced Dow will soar past 40,000 or the world’s most bearish hedge fund that’s more convinced than ever that a crash is coming, our long-short investment strategy doesn’t rely on bull or bear markets to deliver double digit returns. We only rely on the best performing hedge funds‘ buy/sell signals. We’re going to take a look at the fresh hedge fund action encompassing GCI Liberty, Inc. (NASDAQ:GLIBA).

At Q3’s end, a total of 34 of the hedge funds tracked by Insider Monkey were bullish on this stock, a change of -11% from the second quarter of 2019. Below, you can check out the change in hedge fund sentiment towards GLIBA over the last 17 quarters. So, let’s examine which hedge funds were among the top holders of the stock and which hedge funds were making big moves. 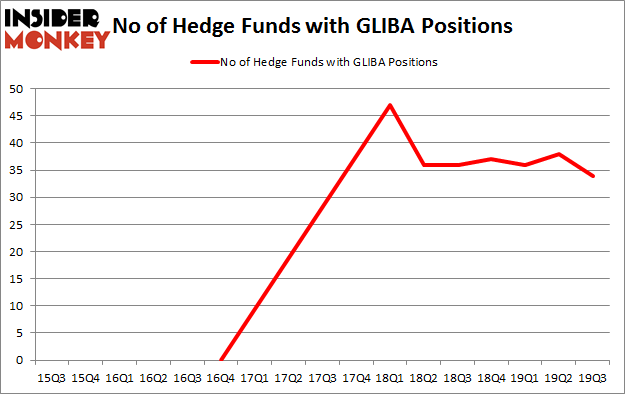 More specifically, FPR Partners was the largest shareholder of GCI Liberty, Inc. (NASDAQ:GLIBA), with a stake worth $554.7 million reported as of the end of September. Trailing FPR Partners was Eagle Capital Management, which amassed a stake valued at $413.2 million. Southeastern Asset Management, D E Shaw, and Tiger Eye Capital were also very fond of the stock, becoming one of the largest hedge fund holders of the company. In terms of the portfolio weights assigned to each position Tiger Eye Capital allocated the biggest weight to GCI Liberty, Inc. (NASDAQ:GLIBA), around 31.32% of its portfolio. Manor Road Capital Partners is also relatively very bullish on the stock, designating 12.88 percent of its 13F equity portfolio to GLIBA.

Judging by the fact that GCI Liberty, Inc. (NASDAQ:GLIBA) has witnessed declining sentiment from the aggregate hedge fund industry, it’s safe to say that there was a specific group of hedge funds that slashed their positions entirely heading into Q4. At the top of the heap, Jorge Paulo Lemann’s 3G Capital sold off the largest investment of the “upper crust” of funds tracked by Insider Monkey, comprising about $19.2 million in stock, and Martin D. Sass’s MD Sass was right behind this move, as the fund dumped about $14.5 million worth. These bearish behaviors are interesting, as aggregate hedge fund interest fell by 4 funds heading into Q4.

As you can see these stocks had an average of 26.75 hedge funds with bullish positions and the average amount invested in these stocks was $623 million. That figure was $2003 million in GLIBA’s case. Alliance Data Systems Corporation (NYSE:ADS) is the most popular stock in this table. On the other hand Robert Half International Inc. (NYSE:RHI) is the least popular one with only 21 bullish hedge fund positions. GCI Liberty, Inc. (NASDAQ:GLIBA) is not the most popular stock in this group but hedge fund interest is still above average. Our calculations showed that top 20 most popular stocks among hedge funds returned 37.4% in 2019 through the end of November and outperformed the S&P 500 ETF (SPY) by 9.9 percentage points. Hedge funds were also right about betting on GLIBA as the stock returned 14.4% during the fourth quarter (through the end of November) and outperformed the market. Hedge funds were rewarded for their relative bullishness.