GameStop Corp. (GME): How to Make a Company Disappear 101

In 1983, legendary magician and illusionist, David Copperfield, made the Statue of Liberty disappear instantly in what is still today one of the greatest and most memorable tricks of all time.  In the stock market, there have been companies that have made others disappear nearly as fast by either a revolutionizing product or a superior business idea.  Other companies simply go away because their business model no longer fits in today’s world.  In this article, I discuss a couple of trends I feel are leading to a similar vanishing act among some popular companies.

Game Over for GameStop Corp. (NYSE:GME)

There was a time when GameStop Corp. (NYSE:GME) made sense.  That time was far before its IPO in 2002 where it saw its stock soar eclipsing $63/share at the end of 2007.  The Babbage’s, FuncoLand’s, and Electronic Boutique’s of the 1980s and 1990s evolved to form what is today the world’s largest multichannel video game retailer that sells new and used video game hardware, physical and digital video game software, and accessories for both consoles and PCs.  However, since 2007 the stock has fallen over 60% and I believe it will likely fall much lower in the future until it is game over for GameStop.

For the 3rd quarter of 2012, net sales decreased by 8.9% or $174 million, and this was primarily attributable to a decrease in comparable store sales of 8.3%.  New video game hardware sales played a huge part as it decreased 33.4% or $92.8 million.  Mad Money’s Jim Cramer stated in mid-January that used games declined about 15% during the holiday season, and because used games represent about 30% of all revenues, this led to Jim Cramer’s downgraded opinion of the stock.  I disagree with this logic.  Who even buys used games for Christmas presents?  More importantly, if you look at GameStop’s latest earnings report breakdown by segment, it is new video game software, not used, that carries the largest load towards net sales for the company at over 43%.

So why is GameStop on its way to disappearing?  First, streaming video games and downloadable games are crushing their business model.  Less games in their physical medium form (cartridges, CDs, etc.) means no trading and no buying actual games in their traditional form.  If you factor that combined, new and used video game software products make up 70% of their sales, then you can see how this hurts GameStop tremendously.  If you add the growing interest in mobile games like those in the App Store for iPhone where 7 of the top 10 grossing apps are now games, then you can see where gaming customers are now spending their time and money.  When you add the growing popularity of video game subscription services like GameFly, the growing trend of downloadable expansion packs for current games by game developers, and increasing popularity of emulators for older games, these are just more nails in the coffin for GameStop.  Lastly, the 10% of sales that is accounted for by new video game hardware will be erased because GameStop will never be able to price match against the bigger players both online like Amazon.com, Inc. (NASDAQ:AMZN), and in larger discount stores like Target Corporation (NYSE:TGT) or Wal-Mart Stores, Inc. (NYSE:WMT).  Their next earnings announcement is set for March 18, 2013. 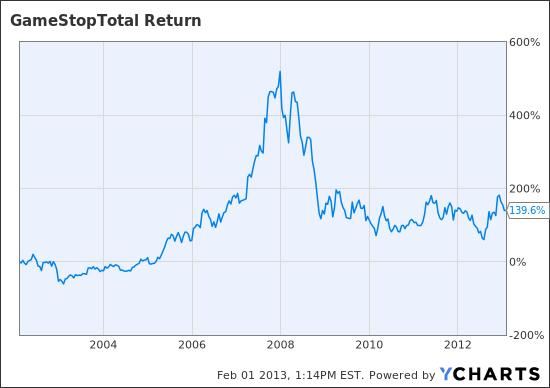 What would happen if a computer genius figures out how to create an operating system immune to all viruses of all kinds?  Anti-virus companies like Symantec, who has seen its stock soar annually, would no longer be needed and would quickly vanish.  Unfortunately no one has created an invincible operating system and Symantec will keep making a ton of money.  However, Corning Incorporated (NYSE:GLW) may have created the invincible screen to put screen and product protector companies like Zagg Inc (NASDAQ:ZAGG) out of business.