During the first half of the fourth quarter the Russell 2000 ETF (IWM) lagged the larger S&P 500 ETF (SPY) by about 4 percentage points as investors worried over the possible ramifications of rising interest rates. The hedge funds and institutional investors we track typically invest more in smaller-cap stocks than an average investor (i.e. only 298 S&P 500 constituents were among the 500 most popular stocks among hedge funds), and we have seen data that shows those funds paring back their overall exposure. Those funds cutting positions in small-caps is one reason why volatility has increased. In the following paragraphs, we take a closer look at what hedge funds and prominent investors think of G1 Therapeutics, Inc. (NASDAQ:GTHX) and see how the stock is affected by the recent hedge fund activity.

G1 Therapeutics, Inc. (NASDAQ:GTHX) was in 20 hedge funds’ portfolios at the end of the third quarter of 2018. GTHX investors should be aware of an increase in hedge fund interest in recent months. There were 13 hedge funds in our database with GTHX positions at the end of the previous quarter. Our calculations also showed that gthx isn’t among the 30 most popular stocks among hedge funds.

How have hedgies been trading G1 Therapeutics, Inc. (NASDAQ:GTHX)?

At Q3’s end, a total of 20 of the hedge funds tracked by Insider Monkey were long this stock, a change of 54% from one quarter earlier. By comparison, 6 hedge funds held shares or bullish call options in GTHX heading into this year. With hedge funds’ capital changing hands, there exists an “upper tier” of noteworthy hedge fund managers who were upping their holdings substantially (or already accumulated large positions). 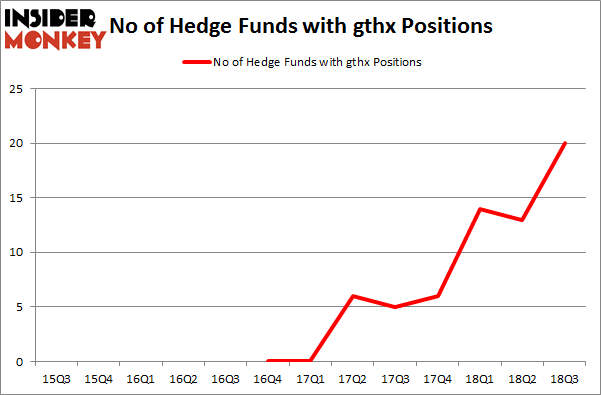 Consequently, key money managers have jumped into G1 Therapeutics, Inc. (NASDAQ:GTHX) headfirst. Laurion Capital Management, managed by Benjamin A. Smith, initiated the largest position in G1 Therapeutics, Inc. (NASDAQ:GTHX). Laurion Capital Management had $5.8 million invested in the company at the end of the quarter. Paul Marshall and Ian Wace’s Marshall Wace LLP also made a $2.3 million investment in the stock during the quarter. The other funds with new positions in the stock are Louis Bacon’s Moore Global Investments, James Dondero’s Highland Capital Management, and Jim Simons’s Renaissance Technologies.

As you can see these stocks had an average of 14.5 hedge funds with bullish positions and the average amount invested in these stocks was $219 million. That figure was $132 million in GTHX’s case. Puma Biotechnology Inc (NYSE:PBYI) is the most popular stock in this table. On the other hand Helios Technologies (NASDAQ:SNHY) is the least popular one with only 8 bullish hedge fund positions. G1 Therapeutics, Inc. (NASDAQ:GTHX) is not the most popular stock in this group but hedge fund interest is still above average. This is a slightly positive signal but we’d rather spend our time researching stocks that hedge funds are piling on. In this regard PBYI might be a better candidate to consider a long position.