Insider Monkey has processed numerous 13F filings of hedge funds and successful value investors to create an extensive database of hedge fund holdings. The 13F filings show the hedge funds’ and successful investors’ positions as of the end of the third quarter. You can find articles about an individual hedge fund’s trades on numerous financial news websites. However, in this article we will take a look at their collective moves over the last 4 years and analyze what the smart money thinks of G. Willi-Food International Limited (NASDAQ:WILC) based on that data.

G. Willi-Food International Limited (NASDAQ:WILC) shares haven’t seen a lot of action during the third quarter. Overall, hedge fund sentiment was unchanged. The stock was in 2 hedge funds’ portfolios at the end of the third quarter of 2019. The level and the change in hedge fund popularity aren’t the only variables you need to analyze to decipher hedge funds’ perspectives. A stock may witness a boost in popularity but it may still be less popular than similarly priced stocks. That’s why at the end of this article we will examine companies such as The ExOne Company (NASDAQ:XONE), Pareteum Corporation (NASDAQ:TEUM), and Aldeyra Therapeutics Inc (NASDAQ:ALDX) to gather more data points. Our calculations also showed that WILC isn’t among the 30 most popular stocks among hedge funds (see the video below). 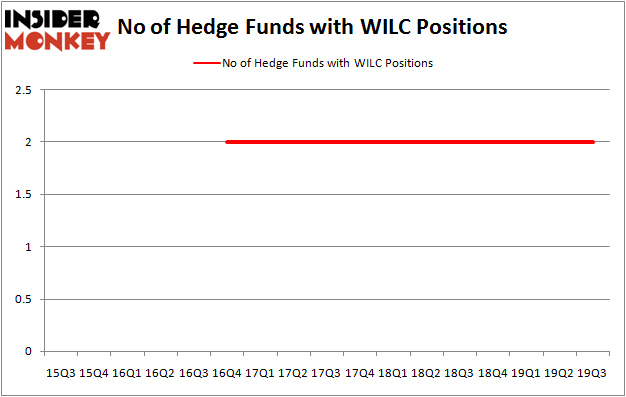 The largest stake in G. Willi-Food International Limited (NASDAQ:WILC) was held by Springhouse Capital Management, which reported holding $11.6 million worth of stock at the end of September. It was followed by Renaissance Technologies with a $7.3 million position.

As you can see these stocks had an average of 6 hedge funds with bullish positions and the average amount invested in these stocks was $15 million. That figure was $19 million in WILC’s case. Aldeyra Therapeutics Inc (NASDAQ:ALDX) is the most popular stock in this table. On the other hand First Community Corporation (NASDAQ:FCCO) is the least popular one with only 3 bullish hedge fund positions. Compared to these stocks G. Willi-Food International Limited (NASDAQ:WILC) is even less popular than FCCO. Our calculations showed that top 20 most popular stocks among hedge funds returned 34.7% in 2019 through November 22nd and outperformed the S&P 500 ETF (SPY) by 8.5 percentage points. A small number of hedge funds were also right about betting on WILC, though not to the same extent, as the stock returned 7.5% during the fourth quarter (through 11/22) and outperformed the market as well.

Here is the 10th Most Popular Stock Among 752 Hedge Funds
Monthly Newsletter Strategy
Download a free copy of our newsletter and see the details inside!
Hedge Fund Resource Center
Related News
10 Easiest Instruments For Adults To Learn On Their Own 10 Most Profitable Franchises In The World 10 Most Famous Sports Arenas In The World
Billionaire Hedge Funds