Investors have always been interested in stocks that pay dividends, but lately, low interest rates on bonds and other fixed-income investments have made solid dividend payers even more valuable. Among the most promising dividend stocks in the market is Franklin Resources, Inc. (NYSE:BEN), and one big reason is that it is one of the few exclusive companies to make the list of Dividend Aristocrats. In order to become a member of this elite group, a company must have raised its dividend payouts to shareholders every single year for at least a quarter-century. Only a few dozen stocks manage to make the cut, and those that do tend to stay there for a long time.

Franklin Resources, Inc. (NYSE:BEN) is the company behind the Franklin Templeton group of mutual funds, closed-end funds, and hedge funds, with almost $850 billion in assets under management as of the end of April. Although it has sought to help investors reap strong returns through the funds it offers, the company’s stock has also been a strong investment in its own right. Let’s take a closer look at Franklin Resources, Inc. (NYSE:BEN) to see whether it can sustain its long streak of rewarding dividend payouts to investors.

What’s happened with Franklin Resources lately?
Franklin Resources, Inc. (NYSE:BEN)’s dividend yield looks puny, but part of the reason comes simply from the stock’s impressive run-up recently. With the stock having soared 70% in the past year to reach new all-time record highs, the yield has plunged from above the 1% level to its current low.

Much of that performance comes from Franklin Resources, Inc. (NYSE:BEN)’s having been in the right place at the right time. The company’s Franklin line of funds is best known for its bond exposure, and the bond market has performed extremely well lately. By contrast, the more stock-focused Janus Capital Group Inc (NYSE:JNS) has struggled with weak share prices, as mainstream investors have been reluctant to get back into the stock market and thereby drive growth in assets.

But Franklin is also under threat from the exchange-traded fund arena. Growth in ETFs has exploded in recent years, as BlackRock (NYSE:BLK) has come to dominate the ETF space with its massive index-oriented fund offerings. In response, Franklin has sought and received SEC approval to run actively managed ETFs, although so far, the company hasn’t actually had an active ETF start trading. Competitors Fidelity and T. Rowe Price Group, Inc. (NASDAQ:TROW) have received SEC permission as well for active ETFs, and so it’ll be important for Franklin to coordinate its eventual launch to maximize its impression in the space. 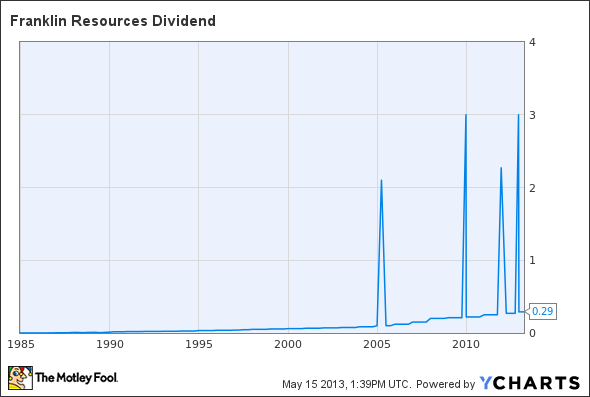 When will Franklin Resources raise its dividends again?
Franklin Resources, Inc. (NYSE:BEN) just raised its regular dividend in December, so you shouldn’t expect an increase until later this year. The bigger question will be whether Franklin comes through with another special dividend. Given its strong earnings, the company certainly has the capacity to do so, but only time will tell whether corporate management decides to share Franklin’s wealth with its shareholders.

The article Investing in This Investment Provider Has Reaped Big Dividends originally appeared on Fool.com.

Fool contributor Dan Caplinger has no position in any stocks mentioned. You can follow him on Twitter @DanCaplinger. The Motley Fool recommends BlackRock.

BlackRock, Inc. (BLK) Has Strong Fundamentals, Should You Buy?