FGL Holdings (FG): Are Hedge Funds Right About This Stock?

FGL Holdings (NYSE:FG) has seen a decrease in activity from the world’s largest hedge funds recently. Our calculations also showed that FG isn’t among the 30 most popular stocks among hedge funds (click for Q3 rankings and see the video below for Q2 rankings).

In the 21st century investor’s toolkit there are many indicators shareholders have at their disposal to size up stocks. A duo of the less known indicators are hedge fund and insider trading interest. Our researchers have shown that, historically, those who follow the best picks of the elite fund managers can trounce the broader indices by a significant amount (see the details here).

Unlike the largest US hedge funds that are convinced Dow will soar past 40,000 or the world’s most bearish hedge fund that’s more convinced than ever that a crash is coming, our long-short investment strategy doesn’t rely on bull or bear markets to deliver double digit returns. We only rely on the best performing hedge funds‘ buy/sell signals. Let’s view the new hedge fund action encompassing FGL Holdings (NYSE:FG). 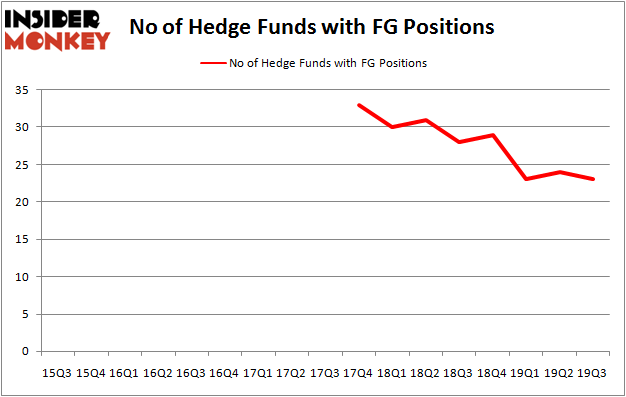 Of the funds tracked by Insider Monkey, Kingstown Capital Management, managed by Michael Blitzer, holds the largest position in FGL Holdings (NYSE:FG). Kingstown Capital Management has a $55.9 million position in the stock, comprising 13.9% of its 13F portfolio. The second largest stake is held by Farhad Nanji and Michael DeMichele of MFN Partners, with a $23.1 million position; the fund has 3.5% of its 13F portfolio invested in the stock. Other professional money managers with similar optimism encompass Brian Gootzeit and Andrew Frank’s StackLine Partners, Joshua Nash’s Ulysses Management and Richard Driehaus’s Driehaus Capital. In terms of the portfolio weights assigned to each position Kingstown Capital Management allocated the biggest weight to FGL Holdings (NYSE:FG), around 13.86% of its 13F portfolio. StackLine Partners is also relatively very bullish on the stock, dishing out 10.43 percent of its 13F equity portfolio to FG.

Seeing as FGL Holdings (NYSE:FG) has experienced declining sentiment from hedge fund managers, it’s easy to see that there was a specific group of hedge funds that decided to sell off their positions entirely by the end of the third quarter. Interestingly, Marc Majzner’s Clearline Capital cut the largest investment of the 750 funds watched by Insider Monkey, worth close to $5.3 million in stock, and Brandon Haley’s Holocene Advisors was right behind this move, as the fund cut about $0.3 million worth. These moves are important to note, as aggregate hedge fund interest dropped by 1 funds by the end of the third quarter.

As you can see these stocks had an average of 21.75 hedge funds with bullish positions and the average amount invested in these stocks was $264 million. That figure was $176 million in FG’s case. Patterson-UTI Energy, Inc. (NASDAQ:PTEN) is the most popular stock in this table. On the other hand Walker & Dunlop Inc. (NYSE:WD) is the least popular one with only 15 bullish hedge fund positions. FGL Holdings (NYSE:FG) is not the most popular stock in this group but hedge fund interest is still above average. Our calculations showed that top 20 most popular stocks among hedge funds returned 37.4% in 2019 through the end of November and outperformed the S&P 500 ETF (SPY) by 9.9 percentage points. Hedge funds were also right about betting on FG as the stock returned 14.5% during the fourth quarter (through the end of November) and outperformed the market. Hedge funds were rewarded for their relative bullishness.