Facebook Inc (FB) Home and Android: The Fight for Mobile Advertising Ramps Up

Android, the open-source Operating System that Google Inc (NASDAQ:GOOG) gives away to smartphone makers, is seriously important to the company’s future.  As more and more of our time on the Web happens through our mobile devices, the increasing market share of Android-based phones guarantees that Google will continue to dominate both Search and the Web Advertising revenue that comes along with it. 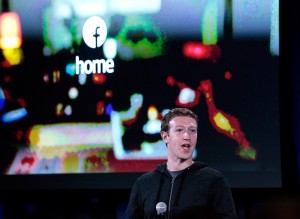 From the Motley Fool’s Evan Niu:

Home is more than just a single app and is more of a layer of services that get integrated into Google Android devices. Mark Zuckerberg said the idea is to emphasize people over apps.  Part of Home is a Cover feed that replaces a smartphone’s home and lock screens and shows what friends are doing.

Simply put, it is a very high level of integration on top of the Android platform.  While this in and of itself isn’t specifically harmful to Google Inc (NASDAQ:GOOG), the recently-launched Graph Search will directly take away from Google’s ad revenue stream, and put that revenue in Facebook Inc (NASDAQ:FB)’s pocket-at least that’s the theory. Think about it this way:

While the lock screen feed isn’t an issue, the replacement of the home screen with a Facebook-centric interface, which will surely include access to Graph Search instead of the Google search bar, is a notable move on the part of Facebook.  And while I honestly have yet to use Graph Search (I’m usually slow to adopt these things- I only joined Facebook Inc (NASDAQ:FB) about a year ago…) the value that it offers in terms of search results that are based on common interests, could be huge.

Who wins?  Who loses?

Honestly, mobile search and advertising is big enough that surely both Facebook and Google will continue to do well.  Google’s decade-long head start in search and continuous innovation will pay dividends.  No matter how much Facebook continues to integrate in our lives, Graph Search won’t replace Google’s search engine any time soon.  In short, this is a great step for Facebook Inc (NASDAQ:FB), and while it may be a speed-bump for Google, I don’t expect it to have a serious impact on the company’s performance.

This is, however, one of the reasons that I am a fan of Apple Inc. (NASDAQ:AAPL). Their end-to-end control over both hardware design and the software interface, and the fact that their revenue is a direct result of product sales, eliminates the risk of a third party commandeering, say iOS, and capturing a revenue stream like advertising that the consumer never sees directly.  Frankly Apple doesn’t care who iPhone users use for search.

On the other hand, one could say that Google and Facebook Inc (NASDAQ:FB) both are “device agnostic,” and can earn revenue no matter what smartphone platform consumers prefer.  Both have their advantages, and are simply different businesses doing different things.

I own all three of these companies, and will continue to buy more shares in them all over time.  Mobile computing is still in its infancy, as is the social Web, and these are three of the key companies in both of these secular shifts. But I just can’t get over how cheap Apple Inc. (NASDAQ:AAPL) has become.  They say a picture is worth a thousand words.  Here’s a chart that could be worth billions: 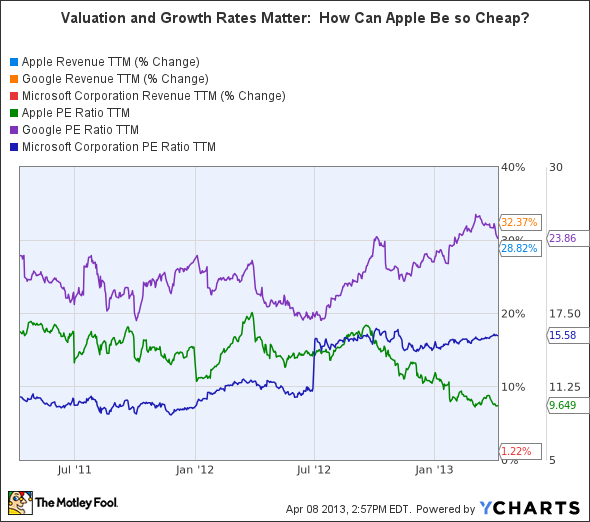 With an annual growth rate (shown to the right of the PE lines) still in the 20%+ range, Apple shares are trading at a significant discount to Google, which is still rapidly growing.  But I’ve added Microsoft for more context:  There is essentially no reason to expect Microsoft (another company that I own shares of) to grow at a faster rate than Apple, but the market is pricing it that way today.  Even value investors should be snapping up shares at this valuation.  In a couple of years, investors make look back on this as the “most obvious” investment opportunity of 2013.

I’ve made a CAPS call on all three of the companies discussed today to outperform the market for the next five years.  Share your thoughts in the comments below!