Exxon Mobil Corporation (XOM): A SWOT Unlike Any You’ve Ever Seen

The second most valuable company in the world, Exxon Mobil Corporation (NYSE:XOM), currently trades with a price to earnings ratio under 10. Exxon has only traded with a valuation this low in its history two other times, in 2008 and 1985.

On April 25, the company reported first-quarter financial results. Compared to the same quarter in 2012, net income increased 5.29%, from $9.45 billion ($2 per share) to $9.5 billion ($2.12 per share). However, the disappointment that stemmed from the report was a result of total revenue falling 12.29% year over year. Wall Street sent the stock tumbling downward the next day.

The company possesses a TTM profit margin of 9.62%, which is anticipated to fall to the 8% mark by 2017. Based on market capitalization, the company is the second most valuable in the world at $403.33 billion. At current prices, the company pays out a dividend yielding 2.80%.

This energy giant recently announced an increase in its quarterly dividend payout, from $0.57 to $0.63, representing the 31st consecutive annual dividend increase by the company.

As Exxon nears all-time highs, is Exxon a solid long-term investment or should investors look elsewhere for black gold? Let’s try and find out.

In 2003, Exxon Mobil Corporation (NYSE:XOM) reported revenue of $246.74 billion; in 2012, the company announced revenue of $482.29 billion, representing year over year annual growth of 6.93%, a trend that it is highly anticipated to sustain into the future with projections placing 2019 revenue at $715 billion (this growth has been a result of consistent reinvestment by the company).

Currently, the company pays out quarterly dividends of $0.63, which annualized puts the dividend as yielding 2.80%, a major advantage for long-term investors.

At the moment, Exxon Mobil Corporation (NYSE:XOM) carries a price earnings ratio of 9.29, a price to sales ratio of 0.86, and a price to book ratio of 2.44; all of which indicate a company trading with a basement valuation.

Presently, the company has a beta of 0.50, representing a company trading with considerably less volatility than the overall market, a major advantage for long-term investors.

In 2011, Exxon generated $56.66 billion in cash flow, up from $30 billion in 2003, and this cash flow position is extremely important as it gives the company the financial security to reward shareholders.

46.25% of shares outstanding are held by institutional investors, equating to nearly $200 billion, displaying the confidence some of largest investors in the world have in the company and its future.

Exxon Mobil Corporation (NYSE:XOM)’s business is spread across the world, with no one region making up more than roughly 33% of overall business, and with this broad diversification comes a greater level of predictability and security for investors. 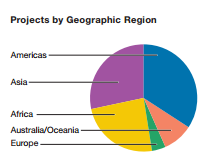 In 1990, the company’s profit margin was sitting around 5%, which has expanded to the current 8.64% level, and this trend of long-term margin expansion is a major strength. 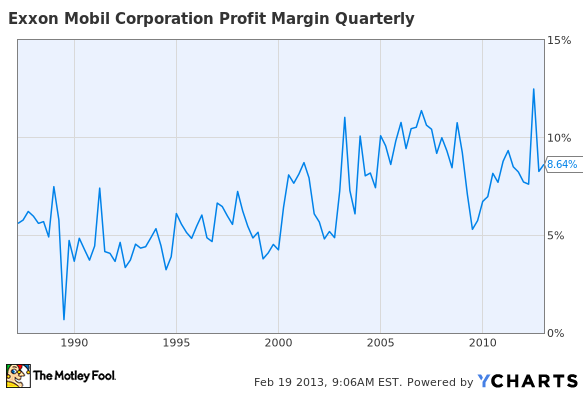 Weaknesses:
Net debt:
Despite possessing $13 billion in cash and cash equivalents on its balance sheet, the company’s $47 billion in debt results in a net debt of $34 billion, or $7.44 per share, a financial weakness of the company.
Opportunities:
Dividend growth:
Since implementing their dividend program in 1882, Exxon Mobil Corporation (NYSE:XOM) has consistently raised their dividend payouts and should continue to do so well into the future. 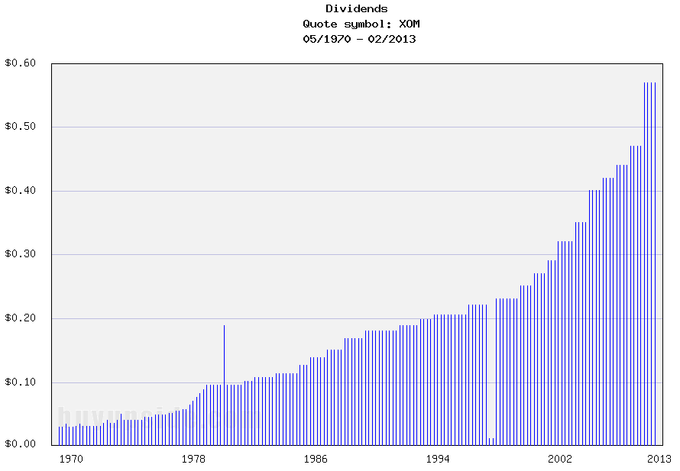 Acquisitions:
The company is consistently utilizing its $12.66 billion in cash to acquire new properties, and further acquisitions could add to the company’s production capacity.
Growth in upstream:
Exxon Mobil Corporation (NYSE:XOM)’s upstream segment, also known as exploration and production, which made up 83.90% of overall business in terms of earnings after income taxes in 2011, experienced substantial growth because of 24 opportunity captures in seven countries in 2011, adding 4.1 billion net oil equivalent barrels to the company’s resource base. Looking forward, the company is developing 21 major projects in the next three years, expecting to add 600,000 oil equivalent barrels per day to the company’s production capacity, presenting incredible opportunity for growth.
Share Tweet Email
Page 1 of 2
Next >>
See All