Hedge funds and large money managers usually invest with a focus on the long-term horizon and, therefore, short-lived dips on the charts, usually don’t make them change their opinion towards a company. This time it may be different. During the first 6 weeks of the fourth quarter we observed increased volatility and small-cap stocks underperformed the market. Hedge fund investor letters indicated that they are cutting their overall exposure, closing out some position and doubling down on others. Let’s take a look at the hedge fund sentiment towards E*TRADE Financial Corporation (NASDAQ:ETFC) to find out whether it was one of their high conviction long-term ideas.

Is E*TRADE Financial Corporation (NASDAQ:ETFC) an attractive investment today? Investors who are in the know are becoming hopeful. The number of long hedge fund positions inched up by 4 in recent months. Our calculations also showed that ETFC isn’t among the 30 most popular stocks among hedge funds. 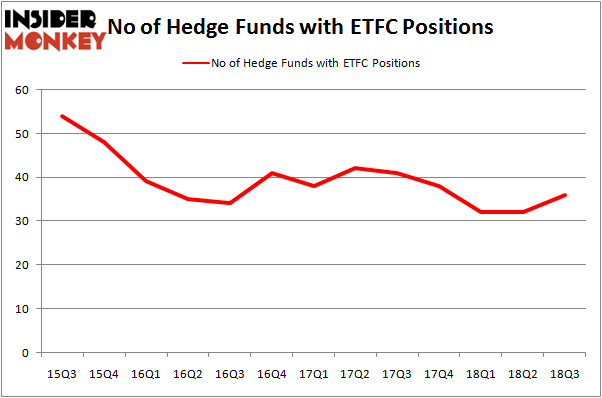 More specifically, Millennium Management was the largest shareholder of E*TRADE Financial Corporation (NASDAQ:ETFC), with a stake worth $389.2 million reported as of the end of September. Trailing Millennium Management was Citadel Investment Group, which amassed a stake valued at $356.5 million. D E Shaw, Southpoint Capital Advisors, and Renaissance Technologies were also very fond of the stock, giving the stock large weights in their portfolios.

Now, specific money managers were breaking ground themselves. Arrowstreet Capital, managed by Peter Rathjens, Bruce Clarke and John Campbell, established the largest position in E*TRADE Financial Corporation (NASDAQ:ETFC). Arrowstreet Capital had $37.1 million invested in the company at the end of the quarter. James Parsons’s Junto Capital Management also made a $25.9 million investment in the stock during the quarter. The other funds with new positions in the stock are Louis Bacon’s Moore Global Investments, Robert Pohly’s Samlyn Capital, and Steve Cohen’s Point72 Asset Management.

As you can see these stocks had an average of 32.75 hedge funds with bullish positions and the average amount invested in these stocks was $932 million. That figure was $1.48 billion in ETFC’s case. United Rentals, Inc. (NYSE:URI) is the most popular stock in this table. On the other hand Arthur J. Gallagher & Co. (NYSE:AJG) is the least popular one with only 26 bullish hedge fund positions. E*TRADE Financial Corporation (NASDAQ:ETFC) is not the most popular stock in this group but hedge fund interest is still above average. This is a slightly positive signal but we’d rather spend our time researching stocks that hedge funds are piling on. In this regard URI might be a better candidate to consider a long position.