Insider Monkey finished processing more than 700 13F filings made by hedge funds and prominent investors. These filings show these funds’ portfolio positions as of September 30th. What do these smart investors think about Equifax Inc. (NYSE:EFX)?

Equifax Inc. (NYSE:EFX) shares haven’t seen a lot of action during the third quarter. Overall, hedge fund sentiment was unchanged. The stock was in 35 hedge funds’ portfolios at the end of the third quarter of 2018. The level and the change in hedge fund popularity aren’t the only variables you need to analyze to decipher hedge funds’ perspectives. A stock may witness a boost in popularity but it may still be less popular than similarly priced stocks. That’s why at the end of this article we will examine companies such as Take-Two Interactive Software, Inc. (NASDAQ:TTWO), Maxim Integrated Products Inc. (NASDAQ:MXIM), and Host Hotels and Resorts Inc (NYSE:HST) to gather more data points.

How have hedgies been trading Equifax Inc. (NYSE:EFX)? 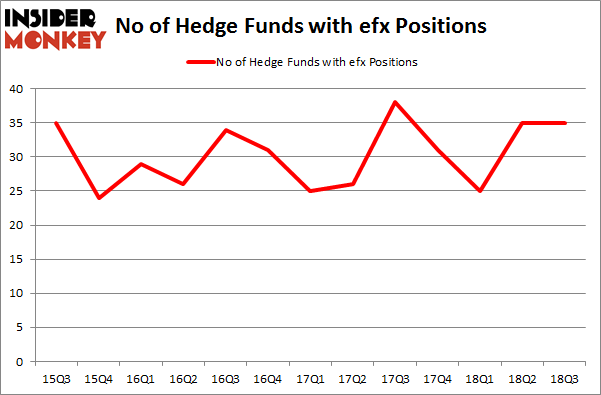 Since Equifax Inc. (NYSE:EFX) has witnessed a decline in interest from the entirety of the hedge funds we track, it’s easy to see that there lies a certain “tier” of hedgies who sold off their full holdings last quarter. Intriguingly, Matthew Sidman’s Three Bays Capital sold off the biggest stake of the 700 funds watched by Insider Monkey, worth an estimated $142.6 million in call options, and Steve Cohen’s Point72 Asset Management was right behind this move, as the fund sold off about $52.5 million worth. These bearish behaviors are important to note, as aggregate hedge fund interest stayed the same (this is a bearish signal in our experience).

As you can see these stocks had an average of 33 hedge funds with bullish positions and the average amount invested in these stocks was $1.01 billion. That figure was $2.08 billion in EFX’s case. Take-Two Interactive Software, Inc. (NASDAQ:TTWO) is the most popular stock in this table. On the other hand Host Hotels and Resorts Inc (NYSE:HST) is the least popular one with only 21 bullish hedge fund positions. Equifax Inc. (NYSE:EFX) is not the most popular stock in this group but hedge fund interest is still above average. This is a slightly positive signal but we’d rather spend our time researching stocks that hedge funds are piling on. In this regard TTWO might be a better candidate to consider a long position.