Many people have heard about the “shale revolution” in oil production. However, from a practical perspective, it has been easy to miss. Despite the growing flow of oil from North Dakota, Texas, and other parts of the U.S. (and Canada), oil prices have remained stubbornly high. 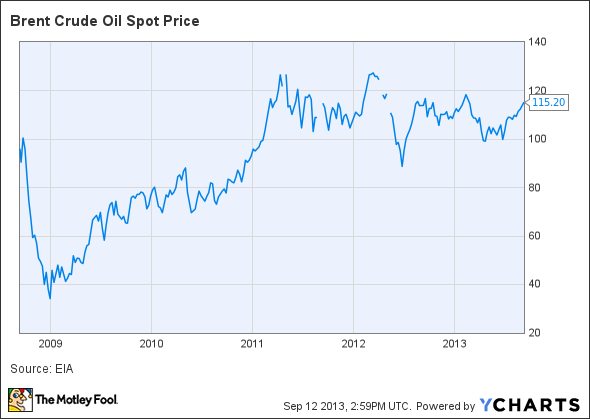 In fact, Brent crude — arguably the most important international oil benchmark — has remained within a trading range of $100 to $120 a barrel since the beginning of 2011, except for a few brief periods. However, that may be about to change. U.S. oil production has been surging higher for the past two years and is on pace to hit record highs as early as the end of 2015.

This rapid growth in production is dramatically reducing the country’s reliance on oil imports — something that will be especially evident in the coming months, as the peak summer driving season recently ended. Eventually, this trend is likely to lead to lower oil prices.

Peak oil: not here yet
As recently as 2007, many informed observers believed that U.S. crude oil production had entered an inexorable period of decline. Considering that declining production had been a constant trend for more than 20 years by that point, this opinion was pretty understandable. U.S. headed for self-sufficiency
The success of so many shale projects is pushing the U.S. closer to self-sufficiency for oil. Last week, U.S. oil production rose to 7.75 million bpd, according to the EIA. That’s the highest level since 1989! U.S. production was just 7 million bpd at the beginning of this year, and 5.64 million bpd two years ago.

We’re still very far from the domestic production record of nearly 10 million bpd set in 1970. That said, if production continues to grow at the recent pace of roughly 1 million bpd per year, U.S. oil production will surpass that level in late 2015.