Russell 2000 ETF (IWM) lagged the larger S&P 500 ETF (SPY) by more than 10 percentage points since the end of the third quarter of 2018 as investors first worried over the possible ramifications of rising interest rates and the escalation of the trade war with China. The hedge funds and institutional investors we track typically invest more in smaller-cap stocks than an average investor (i.e. only about 60% S&P 500 constituents were among the 500 most popular stocks among hedge funds), and we have seen data that shows those funds paring back their overall exposure. Those funds cutting positions in small-caps is one reason why volatility has increased. In the following paragraphs, we take a closer look at what hedge funds and prominent investors think of Enbridge Inc (NYSE:ENB) and see how the stock is affected by the recent hedge fund activity.

Hedge fund interest in Enbridge Inc (NYSE:ENB) shares was flat at the end of last quarter. This is usually a negative indicator. Our calculations also showed that ENB isn’t among the 30 most popular stocks among hedge funds (see the video below). At the end of this article we will also compare ENB to other stocks including BlackRock, Inc. (NYSE:BLK), China Life Insurance Company Ltd. (NYSE:LFC), and Anthem Inc (NYSE:ANTM) to get a better sense of its popularity.

To the average investor there are a multitude of gauges stock traders have at their disposal to analyze their stock investments. A couple of the less known gauges are hedge fund and insider trading signals. We have shown that, historically, those who follow the best picks of the elite money managers can outperform their index-focused peers by a healthy amount (see the details here). 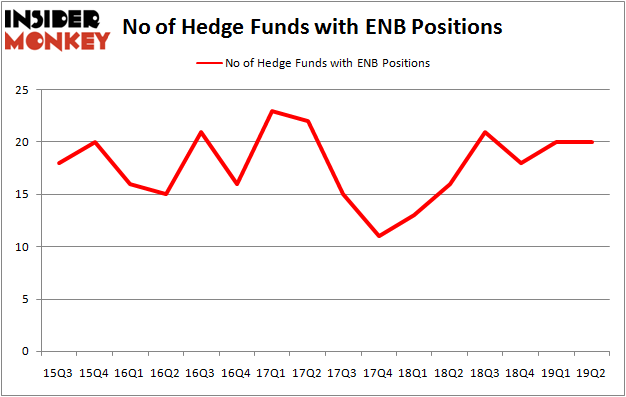 Unlike some fund managers who are betting on Dow reaching 40000 in a year, our long-short investment strategy doesn’t rely on bull markets to deliver double digit returns. We only rely on hedge fund buy/sell signals. We’re going to analyze the fresh hedge fund action encompassing Enbridge Inc (NYSE:ENB).

At Q2’s end, a total of 20 of the hedge funds tracked by Insider Monkey held long positions in this stock, a change of 0% from one quarter earlier. On the other hand, there were a total of 16 hedge funds with a bullish position in ENB a year ago. With hedgies’ capital changing hands, there exists a select group of key hedge fund managers who were upping their holdings meaningfully (or already accumulated large positions).

Among these funds, Renaissance Technologies held the most valuable stake in Enbridge Inc (NYSE:ENB), which was worth $136.6 million at the end of the second quarter. On the second spot was Zimmer Partners which amassed $71.5 million worth of shares. Moreover, Citadel Investment Group, Two Sigma Advisors, and D E Shaw were also bullish on Enbridge Inc (NYSE:ENB), allocating a large percentage of their portfolios to this stock.

Due to the fact that Enbridge Inc (NYSE:ENB) has experienced falling interest from the aggregate hedge fund industry, we can see that there is a sect of money managers that elected to cut their entire stakes heading into Q3. Intriguingly, Cliff Asness’s AQR Capital Management dropped the largest stake of all the hedgies followed by Insider Monkey, totaling about $7.4 million in stock. Michael Gelband’s fund, ExodusPoint Capital, also said goodbye to its stock, about $3 million worth. These transactions are important to note, as total hedge fund interest stayed the same (this is a bearish signal in our experience).

As you can see these stocks had an average of 39 hedge funds with bullish positions and the average amount invested in these stocks was $1826 million. That figure was $331 million in ENB’s case. Anthem Inc (NYSE:ANTM) is the most popular stock in this table. On the other hand China Life Insurance Company Ltd. (NYSE:LFC) is the least popular one with only 8 bullish hedge fund positions. Enbridge Inc (NYSE:ENB) is not the least popular stock in this group but hedge fund interest is still below average. This is a slightly negative signal and we’d rather spend our time researching stocks that hedge funds are piling on. Our calculations showed that top 20 most popular stocks among hedge funds returned 24.4% in 2019 through September 30th and outperformed the S&P 500 ETF (SPY) by 4 percentage points. Unfortunately ENB wasn’t nearly as popular as these 20 stocks (hedge fund sentiment was quite bearish); ENB investors were disappointed as the stock returned -1.2% during the third quarter and underperformed the market. If you are interested in investing in large cap stocks with huge upside potential, you should check out the top 20 most popular stocks among hedge funds as many of these stocks already outperformed the market so far in 2019.