Eli Lilly and Company (LLY): Are Hedge Funds Right About This Stock?

With the third-quarter round of 13F filings behind us it is time to take a look at the stocks in which some of the best money managers in the world preferred to invest or sell heading into the fourth quarter. One of these stocks was Eli Lilly and Company (NYSE:LLY).

Eli Lilly and Company (NYSE:LLY) investors should pay attention to an increase in support from the world’s most elite money managers lately. Our calculations also showed that LLY isn’t among the 30 most popular stocks among hedge funds.

How are hedge funds trading Eli Lilly and Company (NYSE:LLY)?

Heading into the fourth quarter of 2018, a total of 40 of the hedge funds tracked by Insider Monkey were bullish on this stock, a change of 21% from the second quarter of 2018. Below, you can check out the change in hedge fund sentiment towards LLY over the last 13 quarters. With the smart money’s capital changing hands, there exists a few notable hedge fund managers who were increasing their holdings significantly (or already accumulated large positions). 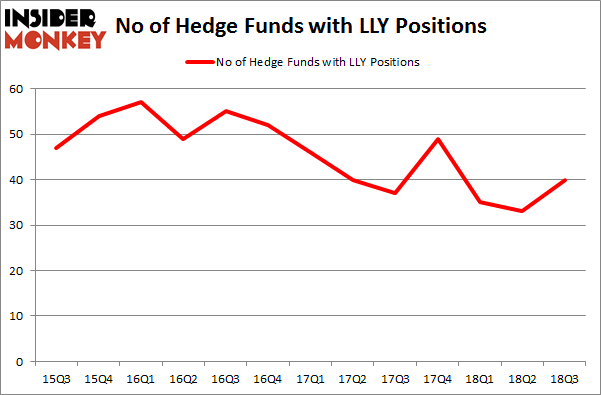 The largest stake in Eli Lilly and Company (NYSE:LLY) was held by Fisher Asset Management, which reported holding $399.9 million worth of stock at the end of September. It was followed by Arrowstreet Capital with a $390.2 million position. Other investors bullish on the company included D E Shaw, Adage Capital Management, and Two Sigma Advisors.

Consequently, key hedge funds have been driving this bullishness. Capital Growth Management, managed by Ken Heebner, assembled the most outsized position in Eli Lilly and Company (NYSE:LLY). Capital Growth Management had $43.5 million invested in the company at the end of the quarter. Jonathon Jacobson’s Highfields Capital Management also initiated a $37.6 million position during the quarter. The other funds with new positions in the stock are Principal Global Investors’s Columbus Circle Investors, Ian Simm’s Impax Asset Management, and Alec Litowitz and Ross Laser’s Magnetar Capital.

As you can see these stocks had an average of 35.25 hedge funds with bullish positions and the average amount invested in these stocks was $2.82 billion. That figure was $1.71 billion in LLY’s case. United Technologies Corporation (NYSE:UTX) is the most popular stock in this table. On the other hand Novo Nordisk A/S (NYSE:NVO) is the least popular one with only 17 bullish hedge fund positions. Eli Lilly and Company (NYSE:LLY) is not the most popular stock in this group but hedge fund interest is still above average. This is a slightly positive signal but we’d rather spend our time researching stocks that hedge funds are piling on. In this regard UTX might be a better candidate to consider a long position.