The SEC requires hedge funds and wealthy investors with over a certain portfolio size to file a report that shows their positions at the end of every quarter. Even though it isn’t the intention, these filings level the playing field for ordinary investors. The latest round of 13F filings discloses the funds’ positions on June 30. We at Insider Monkey have made an extensive database of more than 700 of those elite funds and prominent investors’ filings. In this article, we analyze how these elite funds and prominent investors traded Electronic Arts Inc. (NASDAQ:EA) based on those filings.

Electronic Arts was one of the stocks that was pitched at the GIBI Conference last year. Jeanie Wyatt liked Electronic Arts because the company enjoys higher margins due to going over the top (provides its products via Internet) than its peers that still focus on traditional distribution methods, like selling physical video games in stores. Moreover, Electronic Arts Inc. (NASDAQ:EA) has accelerating sales growth and has new upside in the e-sports segment. That was an accurate assessment as EA outperformed the market over the following 9 month period.

At Q3’s end, a total of 79 of the hedge funds tracked by Insider Monkey were long this stock, a change of 30% from one quarter earlier. On the other hand, there were a total of 63 hedge funds with a bullish position in EA at the beginning of this year. With hedge funds’ positions undergoing their usual ebb and flow, there exists a few key hedge fund managers who were upping their stakes considerably (or already accumulated large positions). 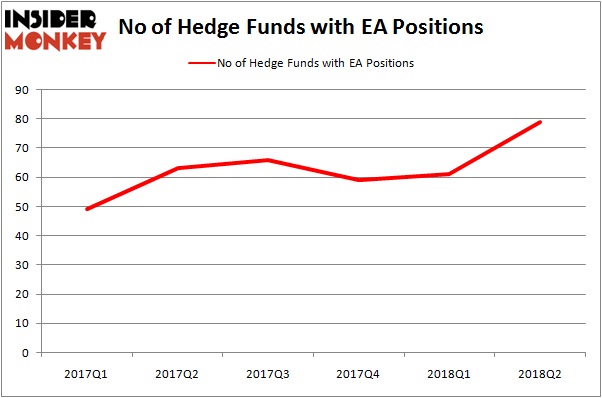 The largest stake in Electronic Arts Inc. (NASDAQ:EA) was held by Coatue Management, which reported holding $923.7 million worth of stock at the end of June. It was followed by Lone Pine Capital with a $890.9 million position. Other investors bullish on the company included Carbonado Capital, DSAM Partners, and Egerton Capital Limited.

As you can see these stocks had an average of 6.25 hedge funds with bullish positions and the average amount invested in these stocks was $229 million. That figure was $6323 million in EA’s case. Carnival plc (ADR) (NYSE:CUK) is the most popular stock in this table. On the other hand Mizuho Financial Group Inc. (ADR) (NYSE:MFG) is the least popular one with only 4 bullish hedge fund positions. Compared to these stocks Electronic Arts Inc. (NASDAQ:EA) is more popular among hedge funds.

Having said that EA has been among the worst performing stocks since the beginning of this summer as as the company’s management is guiding lower than Wall Street analysts. For fiscal 2019, management guided for flat revenue growth, and slightly negative earnings. Personally I prefer PES2019 over FiFA, so never considered a position in EA. I don’t think EA is an attractively priced stock given its zero growth and sky high PE ratio.