The financial regulations require hedge funds and wealthy investors that crossed the $100 million equity holdings threshold to file a report that shows their positions at the end of every quarter. Even though it isn’t the intention, these filings to a certain extent level the playing field for ordinary investors. The latest round of 13F filings disclosed the funds’ positions on June 28th. We at Insider Monkey have made an extensive database of nearly 750 of those established hedge funds and famous value investors’ filings. In this article, we analyze how these elite funds and prominent investors traded Dycom Industries, Inc. (NYSE:DY) based on those filings.

Dycom Industries, Inc. (NYSE:DY) shares haven’t seen a lot of action during the second quarter. Overall, hedge fund sentiment was unchanged. The stock was in 17 hedge funds’ portfolios at the end of June. At the end of this article we will also compare DY to other stocks including Diodes Incorporated (NASDAQ:DIOD), Scientific Games Corporation (NASDAQ:SGMS), and Compass Minerals International, Inc. (NYSE:CMP) to get a better sense of its popularity.

At the end of the second quarter, a total of 17 of the hedge funds tracked by Insider Monkey were long this stock, a change of 0% from one quarter earlier. Below, you can check out the change in hedge fund sentiment towards DY over the last 16 quarters. With hedge funds’ sentiment swirling, there exists an “upper tier” of noteworthy hedge fund managers who were increasing their holdings significantly (or already accumulated large positions). 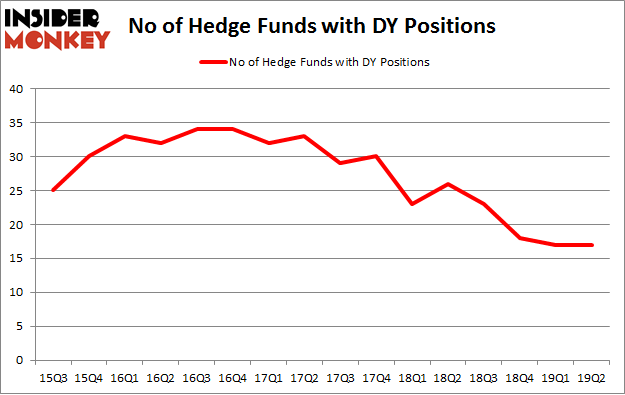 Among these funds, Renaissance Technologies held the most valuable stake in Dycom Industries, Inc. (NYSE:DY), which was worth $20.8 million at the end of the second quarter. On the second spot was ACK Asset Management which amassed $16.7 million worth of shares. Moreover, Shellback Capital, Two Sigma Advisors, and Buckingham Capital Management were also bullish on Dycom Industries, Inc. (NYSE:DY), allocating a large percentage of their portfolios to this stock.

Because Dycom Industries, Inc. (NYSE:DY) has faced bearish sentiment from the smart money, logic holds that there lies a certain “tier” of hedgies that slashed their positions entirely heading into Q3. Intriguingly, Jerome L. Simon’s Lonestar Capital Management dropped the biggest investment of all the hedgies monitored by Insider Monkey, totaling close to $4.6 million in stock. David Brown’s fund, Hawk Ridge Management, also sold off its stock, about $4.1 million worth. These moves are intriguing to say the least, as total hedge fund interest stayed the same (this is a bearish signal in our experience).

As you can see these stocks had an average of 21.25 hedge funds with bullish positions and the average amount invested in these stocks was $244 million. That figure was $68 million in DY’s case. Scientific Games Corporation (NASDAQ:SGMS) is the most popular stock in this table. On the other hand Compass Minerals International, Inc. (NYSE:CMP) is the least popular one with only 16 bullish hedge fund positions. Dycom Industries, Inc. (NYSE:DY) is not the least popular stock in this group but hedge fund interest is still below average. This is a slightly negative signal and we’d rather spend our time researching stocks that hedge funds are piling on. Our calculations showed that top 20 most popular stocks among hedge funds returned 24.4% in 2019 through September 30th and outperformed the S&P 500 ETF (SPY) by 4 percentage points. Unfortunately DY wasn’t nearly as popular as these 20 stocks (hedge fund sentiment was quite bearish); DY investors were disappointed as the stock returned -13.3% during the third quarter and underperformed the market. If you are interested in investing in large cap stocks with huge upside potential, you should check out the top 20 most popular stocks among hedge funds as many of these stocks already outperformed the market so far in 2019.