Roundy’s Inc (NYSE:RNDY) operates grocery stores in the upper midwest under the names Pick ‘n Save, Rainbow, Copps, Metro Mart, and Mariano’s Fresh Market. Forbes recently named it a top dividend stock (here), but I couldn’t disagree more. First of all, $10,000 does not represent big insider buying by a director. But that’s not the big issue. Many investors look at Roundy’s Inc (NYSE:RNDY) 6.5% dividend and see opportunity. I see a disaster waiting to happen. 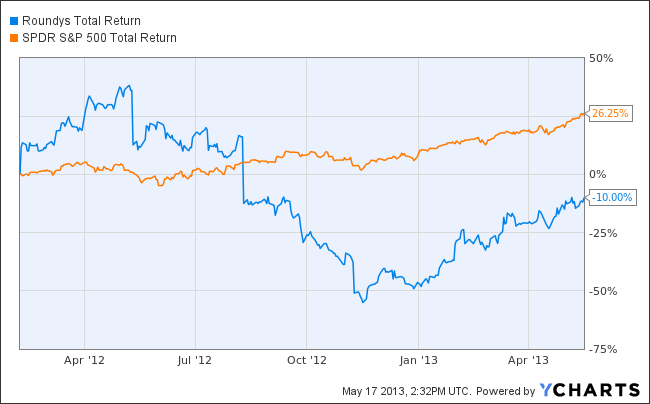 The 6.55% dividend can be enticing.  Who wouldn’t want that instead of the horrendous bond yields we have currently?  But keep in mind that Roundy’s dividend used to be close to 12% less than a year ago.  Roundy’s Inc (NYSE:RNDY) is paying out less while its share price drops.  That’s not a good recipe for long-term investors.

A look at Roundy’s 10-Q shows some bigger problems.  They have $125 million and $675 million in debt that matures in February 2017 and February 2019, respectively.  That may seem like a long way off.  So, to put those amounts in perspective, let’s consider the following for Roundy’s:

If Roundy’s can match its 2012 cash flow from operations for the next 6 years (2013 – 2018), it will produce $634.2 million, not quite enough to cover the $800 million total debt.  The $125 million due in 2017 should be fine, but Roundy’s will have to grow its cash flow just to pay-off its remaining debt in time.  Then, it still needs to find cash to cover capital expenditures and the dividend.  At that point, you’re counting on another refinance just to keep going.  This could certainly happen if things go well, but who knows what rates will be then. Roundy’s Inc (NYSE:RNDY) currently gets LIBOR plus 4.5%.  Again, this is not a good recipe for investors.

If you want to invest in grocery stores, look at some of Roundy’s Inc (NYSE:RNDY) competitors for a better story.

The Kroger Co. (NYSE:KR) has its own mountain of debt, but is in a much better cash flow position to handle it.  The stock has had a great run in 2013.  Its P/E of 12.6 is reasonable and it provides a solid 1.7% dividend yield. 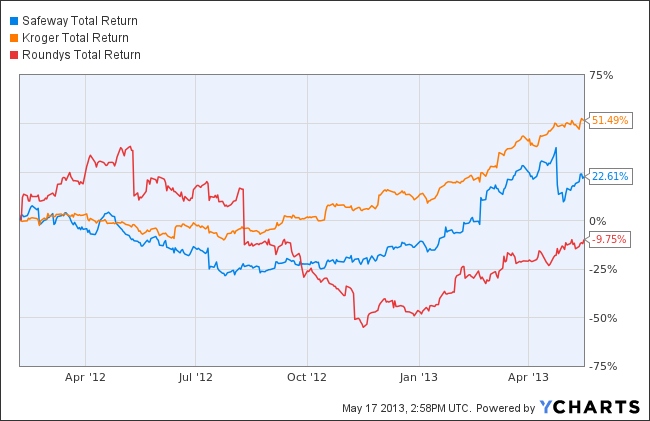