The 700+ hedge funds and famous money managers tracked by Insider Monkey have already compiled and submitted their 13F filings for the third quarter, which unveil their equity positions as of September 30. We went through these filings, fixed typos and other more significant errors and identified the changes in hedge fund portfolios. Our extensive review of these public filings is finally over, so this article is set to reveal the smart money sentiment towards Domo Inc. (NASDAQ:DOMO).

Domo Inc. (NASDAQ:DOMO) shares haven’t seen a lot of action during the third quarter. Overall, hedge fund sentiment was unchanged. The stock was in 14 hedge funds’ portfolios at the end of September. The level and the change in hedge fund popularity aren’t the only variables you need to analyze to decipher hedge funds’ perspectives. A stock may witness a boost in popularity but it may still be less popular than similarly priced stocks. That’s why at the end of this article we will examine companies such as Diamond S Shipping Inc. (NYSE:DSSI), Penn Virginia Corporation (NASDAQ:PVAC), and SI-BONE, Inc. (NASDAQ:SIBN) to gather more data points. Our calculations also showed that DOMO isn’t among the 30 most popular stocks among hedge funds (click for Q3 rankings and see the video below for Q2 rankings).

We leave no stone unturned when looking for the next great investment idea. For example Europe is set to become the world’s largest cannabis market, so we check out this European marijuana stock pitch. One of the most bullish analysts in America just put his money where his mouth is. He says, “I’m investing more today than I did back in early 2009.” So we check out his pitch. We read hedge fund investor letters and listen to stock pitches at hedge fund conferences. We also rely on the best performing hedge funds‘ buy/sell signals. We’re going to take a gander at the latest hedge fund action surrounding Domo Inc. (NASDAQ:DOMO).

How have hedgies been trading Domo Inc. (NASDAQ:DOMO)?

At Q3’s end, a total of 14 of the hedge funds tracked by Insider Monkey were bullish on this stock, a change of 0% from the previous quarter. By comparison, 15 hedge funds held shares or bullish call options in DOMO a year ago. With hedgies’ positions undergoing their usual ebb and flow, there exists a few noteworthy hedge fund managers who were increasing their holdings significantly (or already accumulated large positions). 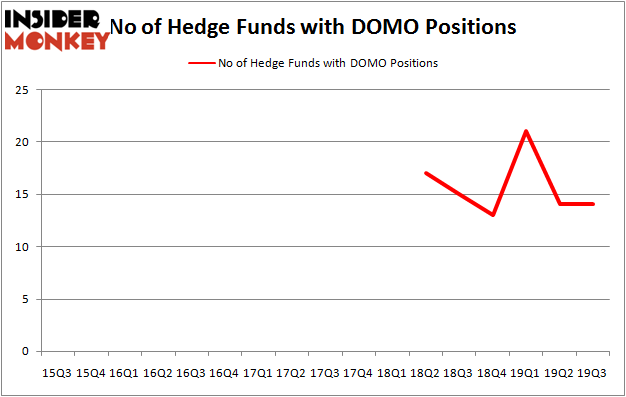 According to publicly available hedge fund and institutional investor holdings data compiled by Insider Monkey, Daniel Patrick Gibson’s Sylebra Capital Management has the number one position in Domo Inc. (NASDAQ:DOMO), worth close to $43.3 million, accounting for 1.9% of its total 13F portfolio. Sitting at the No. 2 spot is David Atterbury of Whetstone Capital Advisors, with a $11.2 million position; 3% of its 13F portfolio is allocated to the company. Remaining members of the smart money that are bullish contain Dmitry Balyasny’s Balyasny Asset Management, Charles Davidson and Joseph Jacobs’s Wexford Capital and Dennis Puri and Oliver Keller’s Hunt Lane Capital. In terms of the portfolio weights assigned to each position Berylson Capital Partners allocated the biggest weight to Domo Inc. (NASDAQ:DOMO), around 3.87% of its 13F portfolio. Whetstone Capital Advisors is also relatively very bullish on the stock, setting aside 3.02 percent of its 13F equity portfolio to DOMO.

Judging by the fact that Domo Inc. (NASDAQ:DOMO) has faced a decline in interest from the smart money, logic holds that there was a specific group of hedgies that slashed their full holdings last quarter. It’s worth mentioning that Mark Coe’s Intrinsic Edge Capital dropped the biggest position of the 750 funds watched by Insider Monkey, valued at close to $5.5 million in stock. Israel Englander’s fund, Millennium Management, also dropped its stock, about $3.6 million worth. These transactions are intriguing to say the least, as aggregate hedge fund interest stayed the same (this is a bearish signal in our experience).

As you can see these stocks had an average of 9.75 hedge funds with bullish positions and the average amount invested in these stocks was $91 million. That figure was $94 million in DOMO’s case. Penn Virginia Corporation (NASDAQ:PVAC) is the most popular stock in this table. On the other hand Maverix Metals Inc. (NYSE:MMX) is the least popular one with only 1 bullish hedge fund positions. Domo Inc. (NASDAQ:DOMO) is not the most popular stock in this group but hedge fund interest is still above average. Our calculations showed that top 20 most popular stocks among hedge funds returned 37.4% in 2019 through the end of November and outperformed the S&P 500 ETF (SPY) by 9.9 percentage points. Hedge funds were also right about betting on DOMO as the stock returned 17.6% during the fourth quarter (through the end of November) and outperformed the market. Hedge funds were rewarded for their relative bullishness.

Is Corporate Office Properties Trust (OFC) A Good Stock To Buy?
Monthly Newsletter Strategy
Download a free copy of our newsletter and see the details inside!
Hedge Fund Resource Center
Related News
Is Domo Inc. (DOMO) A Good Stock To Buy? Did Hedge Funds Drop The Ball On Domo Inc. (DOMO) ? 10 Stocks That Went Up During The 2008 Crash 10 Movies About Amnesia on Netflix 20 Countries With Highest Military Spending In The World
Billionaire Hedge Funds