We can judge whether Domino’s Pizza, Inc. (NYSE:DPZ) is a good investment right now by following the lead of some of the best investors in the world and piggybacking their ideas. There’s no better way to get these firms’ immense resources and analytical capabilities working for us than to follow their lead into their best ideas. While not all of these picks will be winners, our research shows that these picks historically outperformed the market when we factor in known risk factors.

Is Domino’s Pizza, Inc. (NYSE:DPZ) ready to rally soon? Prominent investors are getting more bullish. The number of long hedge fund bets improved by 4 recently. Our calculations also showed that DPZ isn’t among the 30 most popular stocks among hedge funds.

What have hedge funds been doing with Domino’s Pizza, Inc. (NYSE:DPZ)? 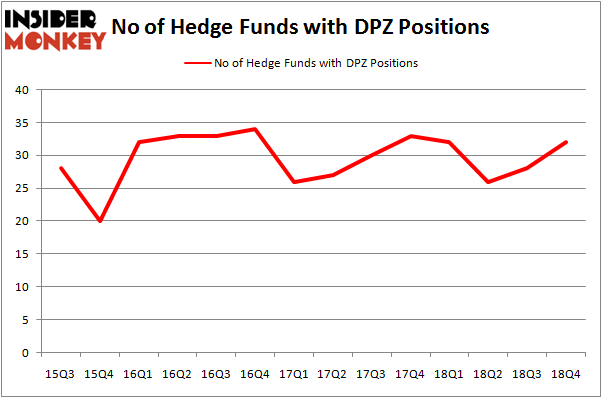 Among these funds, Renaissance Technologies held the most valuable stake in Domino’s Pizza, Inc. (NYSE:DPZ), which was worth $765.2 million at the end of the third quarter. On the second spot was Tiger Global Management LLC which amassed $464.3 million worth of shares. Moreover, Fisher Asset Management, Two Sigma Advisors, and Junto Capital Management were also bullish on Domino’s Pizza, Inc. (NYSE:DPZ), allocating a large percentage of their portfolios to this stock.

As you can see these stocks had an average of 31 hedge funds with bullish positions and the average amount invested in these stocks was $548 million. That figure was $1860 million in DPZ’s case. Tractor Supply Company (NASDAQ:TSCO) is the most popular stock in this table. On the other hand Hasbro, Inc. (NASDAQ:HAS) is the least popular one with only 19 bullish hedge fund positions. Domino’s Pizza, Inc. (NYSE:DPZ) is not the most popular stock in this group but hedge fund interest is still above average. This is a slightly positive signal but we’d rather spend our time researching stocks that hedge funds are piling on. Our calculations showed that top 15 most popular stocks among hedge funds returned 19.7% through March 15th and outperformed the S&P 500 ETF (SPY) by 6.6 percentage points. Unfortunately DPZ wasn’t in this group. Hedge funds that bet on DPZ were disappointed as the stock lost 1.2% and underperformed the market. If you are interested in investing in large cap stocks, you should check out the top 15 hedge fund stocks as 13 of these outperformed the market.

Is Seagate Technology (STX) A Good Stock To Buy?
Monthly Newsletter Strategy
Download a free copy of our newsletter and see the details inside!
Hedge Fund Resource Center
Related News
Hedge Funds Are Buying Domino’s Pizza, Inc. (DPZ) Domino’s Pizza, Inc. (DPZ): Still A Hot Investment or Have We Hit Peak Pizza? 25 Stocks Billionaires Are Piling On Melvin Capital Management’s Returns, AUM, and Holdings 3 Stocks to Buy Ahead of the 2018 World Cup 11 Biggest Fast Food Franchises In The World In 2017 15 Largest, Most Popular and Successful Fast Food Chains In The World 15 Most Physically Demanding Olympic Sports Hedge Funds Have Never Been This Bullish On Visa Inc (V) Ten of the Most Common Addictions
Billionaire Hedge Funds