While the market driven by short-term sentiment influenced by uncertainty regarding the future of the interest rate environment in the US, declining oil prices and the trade war with China, many smart money investors are keeping their optimism regarding the current bull run, while still hedging many of their long positions. However, as we know, big investors usually buy stocks with strong fundamentals, which is why we believe we can profit from imitating them. In this article, we are going to take a look at the smart money sentiment surrounding Trueblue Inc (NYSE:TBI).

Trueblue Inc (NYSE:TBI) has seen a decrease in hedge fund sentiment lately. TBI was in 14 hedge funds’ portfolios at the end of September. There were 16 hedge funds in our database with TBI holdings at the end of the previous quarter. Our calculations also showed that TBI isn’t among the 30 most popular stocks among hedge funds.

Heading into the fourth quarter of 2018, a total of 14 of the hedge funds tracked by Insider Monkey held long positions in this stock, a change of -13% from one quarter earlier. On the other hand, there were a total of 14 hedge funds with a bullish position in TBI at the beginning of this year. With hedge funds’ sentiment swirling, there exists an “upper tier” of notable hedge fund managers who were increasing their holdings substantially (or already accumulated large positions). 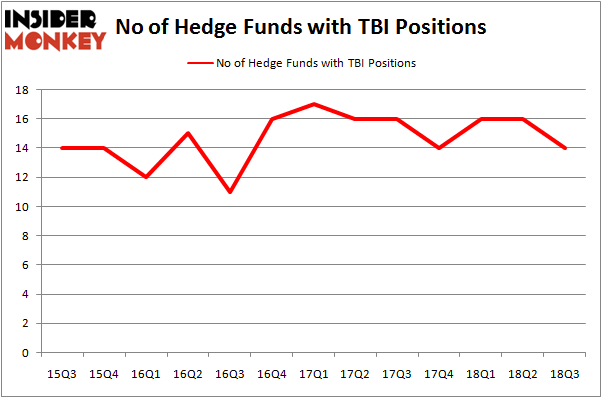 According to Insider Monkey’s hedge fund database, Thomas E. Claugus’s GMT Capital has the largest position in Trueblue Inc (NYSE:TBI), worth close to $33.9 million, comprising 0.9% of its total 13F portfolio. On GMT Capital’s heels is Noam Gottesman of GLG Partners, with a $7.7 million position; the fund has less than 0.1%% of its 13F portfolio invested in the stock. Some other peers that hold long positions encompass Cliff Asness’s AQR Capital Management, Chuck Royce’s Royce & Associates and D. E. Shaw’s D E Shaw.

Seeing as Trueblue Inc (NYSE:TBI) has experienced falling interest from hedge fund managers, we can see that there was a specific group of hedge funds who were dropping their positions entirely in the third quarter. It’s worth mentioning that Peter Rathjens, Bruce Clarke and John Campbell’s Arrowstreet Capital dropped the largest stake of all the hedgies monitored by Insider Monkey, totaling close to $6.2 million in stock. Mike Vranos’s fund, Ellington, also said goodbye to its stock, about $0.3 million worth. These bearish behaviors are important to note, as aggregate hedge fund interest fell by 2 funds in the third quarter.

Let’s now take a look at hedge fund activity in other stocks – not necessarily in the same industry as Trueblue Inc (NYSE:TBI) but similarly valued. These stocks are Viking Therapeutics, Inc. (NASDAQ:VKTX), CareDx, Inc. (NASDAQ:CDNA), Century Aluminum Co (NASDAQ:CENX), and COMSCORE, Inc. (NASDAQ:SCOR). All of these stocks’ market caps are closest to TBI’s market cap.

As you can see these stocks had an average of 17.5 hedge funds with bullish positions and the average amount invested in these stocks was $143 million. That figure was $68 million in TBI’s case. Viking Therapeutics, Inc. (NASDAQ:VKTX) is the most popular stock in this table. On the other hand Century Aluminum Co (NASDAQ:CENX) is the least popular one with only 11 bullish hedge fund positions. Trueblue Inc (NYSE:TBI) is not the least popular stock in this group but hedge fund interest is still below average. This is a slightly negative signal and we’d rather spend our time researching stocks that hedge funds are piling on. In this regard VKTX might be a better candidate to consider a long position.