Is Target Corporation (NYSE:TGT) a good investment right now? We check hedge fund and billionaire investor sentiment before delving into hours of research. Hedge funds spend millions of dollars on Ivy League graduates, expert networks, and get tips from industry insiders. They sometimes fail miserably but historically their consensus stock picks outperformed the market after adjusting for known risk factors.

Is Target Corporation (NYSE:TGT) the right investment to pursue these days? Prominent investors are taking an optimistic view. The number of long hedge fund bets improved by 8 lately. Our calculations also showed that TGT isn’t among the 30 most popular stocks among hedge funds.

How have hedgies been trading Target Corporation (NYSE:TGT)? 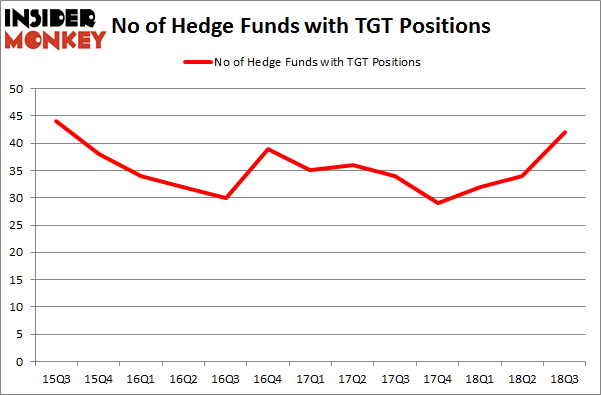 According to publicly available hedge fund and institutional investor holdings data compiled by Insider Monkey, John Overdeck and David Siegel’s Two Sigma Advisors has the most valuable position in Target Corporation (NYSE:TGT), worth close to $449.1 million, accounting for 1.1% of its total 13F portfolio. Sitting at the No. 2 spot is AQR Capital Management, managed by Cliff Asness, which holds a $374 million position; the fund has 0.4% of its 13F portfolio invested in the stock. Other professional money managers that hold long positions comprise D. E. Shaw’s D E Shaw, and Ken Griffin’s Citadel Investment Group.

Let’s now take a look at hedge fund activity in other stocks – not necessarily in the same industry as Target Corporation (NYSE:TGT) but similarly valued. We will take a look at Praxair, Inc. (NYSE:PX), Carnival plc (NYSE:CUK), Crown Castle International Corp. (NYSE:CCI), and Dominion Energy, Inc. (NYSE:D). This group of stocks’ market caps are similar to TGT’s market cap.

As you can see these stocks had an average of 27 hedge funds with bullish positions and the average amount invested in these stocks was $1.01 billion. That figure was $1.97 billion in TGT’s case. Praxair, Inc. (NYSE:PX) is the most popular stock in this table. On the other hand Carnival plc (NYSE:CUK) is the least popular one with only 8 bullish hedge fund positions. Compared to these stocks Target Corporation (NYSE:TGT) is more popular among hedge funds. Considering that hedge funds are fond of this stock in relation to its market cap peers, it may be a good idea to analyze it in detail and potentially include it in your portfolio.