Before we spend countless hours researching a company, we like to analyze what insiders, hedge funds and billionaire investors think of the stock first. This is a necessary first step in our investment process because our research has shown that the elite investors’ consensus returns have been exceptional. In the following paragraphs, we find out what the billionaire investors and hedge funds think of SL Green Realty Corp (NYSE:SLG).

Is SL Green Realty Corp (NYSE:SLG) going to take off soon? Prominent investors are selling. The number of long hedge fund bets were trimmed by 4 in recent months. Our calculations also showed that SLG isn’t among the 30 most popular stocks among hedge funds (see the video below).

At Q2’s end, a total of 15 of the hedge funds tracked by Insider Monkey held long positions in this stock, a change of -21% from the first quarter of 2019. On the other hand, there were a total of 18 hedge funds with a bullish position in SLG a year ago. With hedge funds’ capital changing hands, there exists a select group of key hedge fund managers who were adding to their stakes significantly (or already accumulated large positions). 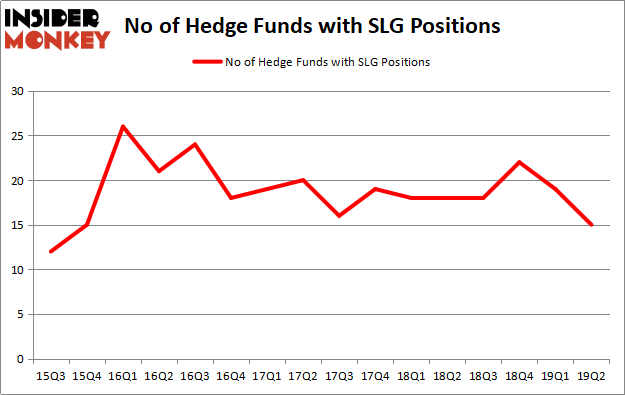 The largest stake in SL Green Realty Corp (NYSE:SLG) was held by Long Pond Capital, which reported holding $91.4 million worth of stock at the end of March. It was followed by Renaissance Technologies with a $91.1 million position. Other investors bullish on the company included Winton Capital Management, Millennium Management, and Citadel Investment Group.

Due to the fact that SL Green Realty Corp (NYSE:SLG) has witnessed declining sentiment from the aggregate hedge fund industry, it’s safe to say that there is a sect of money managers that slashed their entire stakes last quarter. Intriguingly, John A. Levin’s Levin Capital Strategies dropped the largest stake of all the hedgies watched by Insider Monkey, worth an estimated $6.4 million in call options. D. E. Shaw’s fund, D E Shaw, also dropped its call options, about $2.8 million worth. These bearish behaviors are intriguing to say the least, as total hedge fund interest fell by 4 funds last quarter.

As you can see these stocks had an average of 30 hedge funds with bullish positions and the average amount invested in these stocks was $1018 million. That figure was $276 million in SLG’s case. Anaplan, Inc. (NYSE:PLAN) is the most popular stock in this table. On the other hand Royal Gold, Inc (NASDAQ:RGLD) is the least popular one with only 19 bullish hedge fund positions. Compared to these stocks SL Green Realty Corp (NYSE:SLG) is even less popular than RGLD. Our calculations showed that top 20 most popular stocks among hedge funds returned 24.4% in 2019 through September 30th and outperformed the S&P 500 ETF (SPY) by 4 percentage points. A small number of hedge funds were also right about betting on SLG, though not to the same extent, as the stock returned 2.8% during the third quarter and outperformed the market as well.