Ross Stores, Inc. (NASDAQ:ROST) has seen an increase in enthusiasm from smart money recently. Our calculations also showed that ROST isn’t among the 30 most popular stocks among hedge funds.

In the financial world there are several metrics shareholders employ to assess stocks. Two of the most under-the-radar metrics are hedge fund and insider trading moves. Our researchers have shown that, historically, those who follow the top picks of the best investment managers can outperform their index-focused peers by a healthy margin (see the details here). 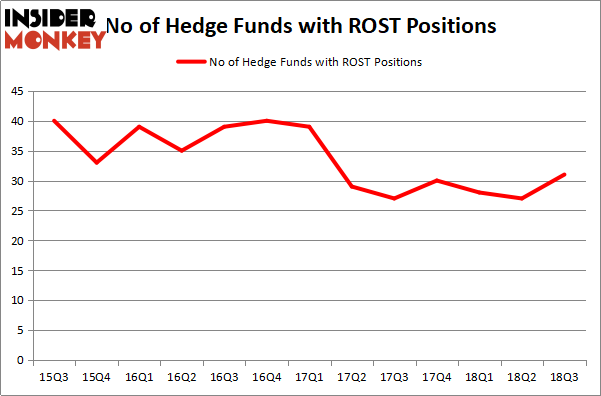 Among these funds, AQR Capital Management held the most valuable stake in Ross Stores, Inc. (NASDAQ:ROST), which was worth $243.1 million at the end of the third quarter. On the second spot was Arrowstreet Capital which amassed $140.6 million worth of shares. Moreover, Adage Capital Management, Alyeska Investment Group, and Scopus Asset Management were also bullish on Ross Stores, Inc. (NASDAQ:ROST), allocating a large percentage of their portfolios to this stock.

As aggregate interest increased, key hedge funds were leading the bulls’ herd. Scopus Asset Management, managed by Alexander Mitchell, established the most valuable position in Ross Stores, Inc. (NASDAQ:ROST). Scopus Asset Management had $92.2 million invested in the company at the end of the quarter. Jim Simons’s Renaissance Technologies also made a $26.9 million investment in the stock during the quarter. The following funds were also among the new ROST investors: Matthew Hulsizer’s PEAK6 Capital Management, Michael Platt and William Reeves’s BlueCrest Capital Mgmt., and Benjamin A. Smith’s Laurion Capital Management.

As you can see these stocks had an average of 41.25 hedge funds with bullish positions and the average amount invested in these stocks was $1.76 billion. That figure was $966 million in ROST’s case. Electronic Arts Inc. (NASDAQ:EA) is the most popular stock in this table. On the other hand TransCanada Corporation (NYSE:TRP) is the least popular one with only 14 bullish hedge fund positions. Ross Stores, Inc. (NASDAQ:ROST) is not the least popular stock in this group but hedge fund interest is still below average. This is a slightly negative signal and we’d rather spend our time researching stocks that hedge funds are piling on. In this regard EA might be a better candidate to consider a long position.