Hedge funds and large money managers usually invest with a focus on the long-term horizon and, therefore, short-lived dips on the charts, usually don’t make them change their opinion towards a company. This time it may be different. During the first 6 weeks of the fourth quarter we observed increased volatility and small-cap stocks underperformed the market. Hedge fund investor letters indicated that they are cutting their overall exposure, closing out some position and doubling down on others. Let’s take a look at the hedge fund sentiment towards Reliance Steel & Aluminum (NYSE:RS) to find out whether it was one of their high conviction long-term ideas.

Is Reliance Steel & Aluminum Co. (NYSE:RS) going to take off soon? Hedge funds are betting on the stock. The number of long hedge fund positions advanced by 3 recently, and the company was in 27 hedge funds’ portfolios at the end of September. Although the company has been steadily building its network of shareholders, among them there weren’t many billionaires. (If you are interested to see which stock billionaires have been piling on, take a look at the list of 30 stocks billionaires are crazy about: Insider Monkey billionaires stock index.)

While collecting more data about Reliance Steel & Aluminum Co. (NYSE:RS) for the purpose of thorough analysis, we tracked down Poplar Forest Capital’s Quarterly Letter, in which this investment adviser shares its opinion on it. Here is that part of the letter:

“Reliance Steel (ticker: RS) is the largest metals service company in North America. It operates in a highly fragmented market with 2x to 3x the market share of its closest competitor. We view the company as the Berkshire Hathaway of the steel industry – it generates strong returns, allocates capital well and manages its business to take advantage of M&A opportunities in both good and bad market environments. In addition to steel price volatility, recent tariff and China concerns have dampened enthusiasm. However, we believe that at 10x 2019 consensus estimated earnings, Reliance is a well- run company offering above average return prospects while trading at a deep discount to the market.” 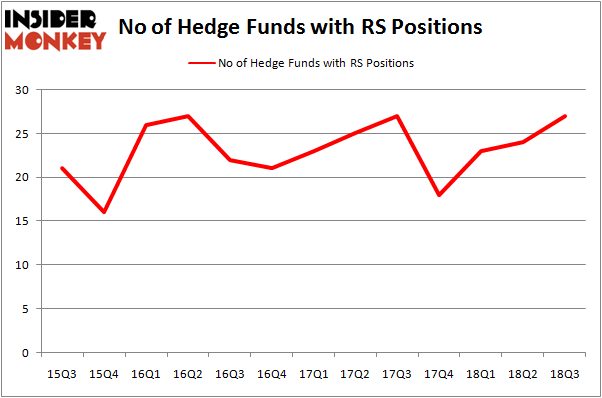 Among these funds, Luminus Management held the most valuable stake in Reliance Steel & Aluminum Co. (NYSE:RS), which was worth $97.8 million at the end of the third quarter. On the second spot was Royce & Associates which amassed $84.4 million worth of shares. Moreover, AQR Capital Management, Millennium Management, and D E Shaw were also bullish on Reliance Steel & Aluminum Co. (NYSE:RS), allocating a large percentage of their portfolios to this stock.

As you can see these stocks had an average of 24 hedge funds with bullish positions and the average amount invested in these stocks was $505 million. That figure was $374 million in RS’s case. Etsy Inc (NASDAQ:ETSY) is the most popular stock in this table. On the other hand Grupo Aeroportuario del Sureste, S. A. B. de C. V. (NYSE:ASR) is the least popular one with only 3 bullish hedge fund positions. Reliance Steel & Aluminum Co. (NYSE:RS) is not the most popular stock in this group but hedge fund interest is still above average. This is a slightly positive signal but we’d rather spend our time researching stocks that hedge funds are piling on. In this regard ETSY might be a better candidate to consider a long position.