Before we spend days researching a stock idea we’d like to take a look at how hedge funds and billionaire investors recently traded that stock. S&P 500 Index ETF (SPY) lost 8.7% through October 26th. Forty percent of the S&P 500 constituents were down more than 10%. The average return of a randomly picked stock in the index is -9.5%. This means you (or a monkey throwing a dart) have less than an even chance of beating the market by randomly picking a stock. On the other hand, the top 25 most popular S&P 500 stocks among hedge funds had an average loss of 8.8%. In this article, we will take a look at what hedge funds think about ORIX Corporation (NYSE:IX).

ORIX Corporation (NYSE:IX) has seen an increase in support from the world’s most elite money managers in recent months. IX was in 6 hedge funds’ portfolios at the end of September. There were 5 hedge funds in our database with IX holdings at the end of the previous quarter. Our calculations also showed that IX isn’t among the 30 most popular stocks among hedge funds.

At the end of the third quarter, a total of 6 of the hedge funds tracked by Insider Monkey were bullish on this stock, a change of 20% from the previous quarter. Below, you can check out the change in hedge fund sentiment towards IX over the last 13 quarters. With hedge funds’ sentiment swirling, there exists a select group of notable hedge fund managers who were adding to their stakes substantially (or already accumulated large positions). 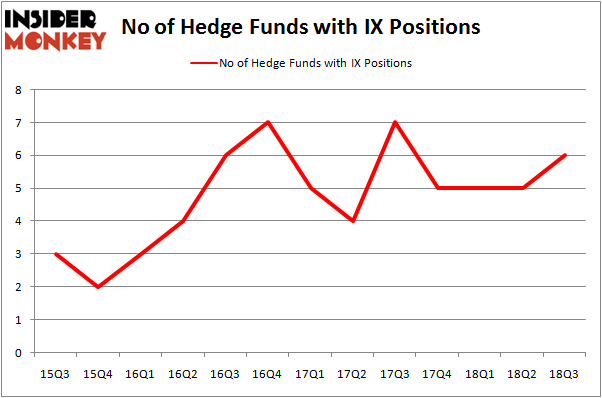 The largest stake in ORIX Corporation (NYSE:IX) was held by Renaissance Technologies, which reported holding $2.7 million worth of stock at the end of September. It was followed by Arrowstreet Capital with a $0.9 million position. Other investors bullish on the company included Millennium Management, Two Sigma Advisors, and D E Shaw.

As one would reasonably expect, specific money managers were leading the bulls’ herd. Millennium Management, managed by Israel Englander, established the most outsized position in ORIX Corporation (NYSE:IX). Millennium Management had $0.7 million invested in the company at the end of the quarter.

As you can see these stocks had an average of 30.5 hedge funds with bullish positions and the average amount invested in these stocks was $1.11 billion. That figure was $6 million in IX’s case. Devon Energy Corp (NYSE:DVN) is the most popular stock in this table. On the other hand Rogers Communications Inc. (NYSE:RCI) is the least popular one with only 15 bullish hedge fund positions. Compared to these stocks ORIX Corporation (NYSE:IX) is even less popular than RCI. Considering that hedge funds aren’t fond of this stock in relation to other companies analyzed in this article, it may be a good idea to analyze it in detail and understand why the smart money isn’t behind this stock. This isn’t necessarily bad news. Although it is possible that hedge funds may think the stock is overpriced and view the stock as a short candidate, they may not be very familiar with the bullish thesis. In either case more research is warranted.