The Insider Monkey team has completed processing the quarterly 13F filings for the September quarter submitted by the hedge funds and other money managers included in our extensive database. Most hedge fund investors experienced strong gains on the back of a strong market performance, which certainly propelled them to adjust their equity holdings so as to maintain the desired risk profile. As a result, the relevancy of these public filings and their content is indisputable, as they may reveal numerous high-potential stocks. The following article will discuss the smart money sentiment towards Orion Marine Group, Inc. (NYSE:ORN).

Orion Marine Group, Inc. (NYSE:ORN) has seen an increase in support from the world’s most elite money managers of late. Our calculations also showed that ORN isn’t among the 30 most popular stocks among hedge funds (click for Q3 rankings and see the video below for Q2 rankings).

In the eyes of most stock holders, hedge funds are seen as slow, outdated financial vehicles of the past. While there are greater than 8000 funds with their doors open at present, We look at the elite of this group, around 750 funds. Most estimates calculate that this group of people control bulk of all hedge funds’ total capital, and by following their finest investments, Insider Monkey has identified various investment strategies that have historically outpaced the broader indices. Insider Monkey’s flagship short hedge fund strategy outrun the S&P 500 short ETFs by around 20 percentage points per year since its inception in May 2014. Our portfolio of short stocks lost 27.8% since February 2017 (through November 21st) even though the market was up more than 39% during the same period. We just shared a list of 7 short targets in our latest quarterly update .

We leave no stone unturned when looking for the next great investment idea. For example Discover is offering this insane cashback card, so we look into shorting the stock. One of the most bullish analysts in America just put his money where his mouth is. He says, “I’m investing more today than I did back in early 2009.” So we check out his pitch. We read hedge fund investor letters and listen to stock pitches at hedge fund conferences. We even check out this option genius’ weekly trade ideas. This December, we recommended Adams Energy as a one-way bet based on an under-the-radar fund manager’s investor letter and the stock already gained 20 percent. With all of this in mind we’re going to take a look at the fresh hedge fund action regarding Orion Marine Group, Inc. (NYSE:ORN). 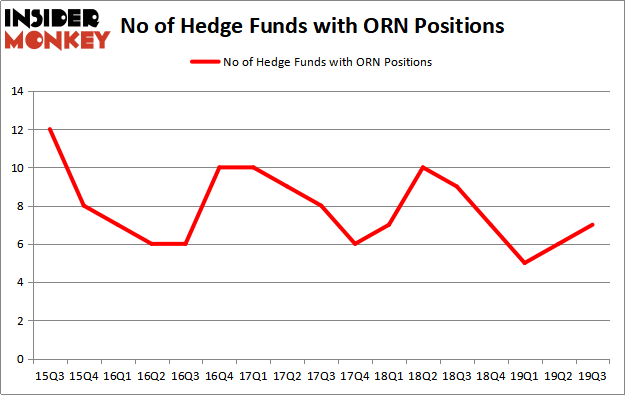 The largest stake in Orion Marine Group, Inc. (NYSE:ORN) was held by Millennium Management, which reported holding $3.1 million worth of stock at the end of September. It was followed by Renaissance Technologies with a $2 million position. Other investors bullish on the company included D E Shaw, Fondren Management, and Two Sigma Advisors. In terms of the portfolio weights assigned to each position Fondren Management allocated the biggest weight to Orion Marine Group, Inc. (NYSE:ORN), around 1.05% of its 13F portfolio. Ancora Advisors is also relatively very bullish on the stock, earmarking 0.04 percent of its 13F equity portfolio to ORN.

As you can see these stocks had an average of 5.75 hedge funds with bullish positions and the average amount invested in these stocks was $10 million. That figure was $10 million in ORN’s case. Mustang Bio, Inc. (NASDAQ:MBIO) is the most popular stock in this table. On the other hand Condor Hospitality Trust, Inc. (NYSEAMERICAN:CDOR) is the least popular one with only 5 bullish hedge fund positions. Compared to these stocks Orion Marine Group, Inc. (NYSE:ORN) is more popular among hedge funds. Our calculations showed that top 20 most popular stocks among hedge funds returned 37.4% in 2019 through the end of November and outperformed the S&P 500 ETF (SPY) by 9.9 percentage points. Hedge funds were also right about betting on ORN as the stock returned 22.4% during the first two months of Q4 and outperformed the market by an even larger margin. Hedge funds were clearly right about piling into this stock relative to other stocks with similar market capitalizations.

Is Coda Octopus Group, Inc. (CODA) A Good Stock To Buy?
Monthly Newsletter Strategy
Download a free copy of our newsletter and see the details inside!
Hedge Fund Resource Center
Related News
Orion Group Holdings Inc (ORN): Does It Measure Up To Its Peers Using This Key Metric? Do Hedge Funds and Insiders Love Matrix Service Co (MTRX)? Should You Avoid Orion Marine Group, Inc. (ORN)? Argan, Inc. (AGX): Are Hedge Funds Right About This Stock? This Metric Says You Are Smart to Sell Great Lakes Dredge & Dock Corporation (GLDD) Sterling Construction Company, Inc. (STRL): Insiders Aren’t Crazy About It This Metric Says You Are Smart to Buy Layne Christensen Company (LAYN) 11 Companies That Caught Lying To The Public, Deceived Customers 10 Countries with the Highest Coffee Consumption in the World 10 Stocks That Went Up During The 2008 Crash
Billionaire Hedge Funds