Before we spend days researching a stock idea we’d like to take a look at how hedge funds and billionaire investors recently traded that stock. S&P 500 Index ETF (SPY) lost 8.7% through October 26th. Forty percent of the S&P 500 constituents were down more than 10%. The average return of a randomly picked stock in the index is -9.5%. This means you (or a monkey throwing a dart) have less than an even chance of beating the market by randomly picking a stock. On the other hand, the top 25 most popular S&P 500 stocks among hedge funds had an average loss of 8.8%. In this article, we will take a look at what hedge funds think about Monro, Inc. (NASDAQ:MNRO).

Monro, Inc. (NASDAQ:MNRO) was in 10 hedge funds’ portfolios at the end of the third quarter of 2018. MNRO investors should be aware of a decrease in activity from the world’s largest hedge funds of late. There were 13 hedge funds in our database with MNRO holdings at the end of the previous quarter. Our calculations also showed that mnro isn’t among the 30 most popular stocks among hedge funds.

How have hedgies been trading Monro, Inc. (NASDAQ:MNRO)? 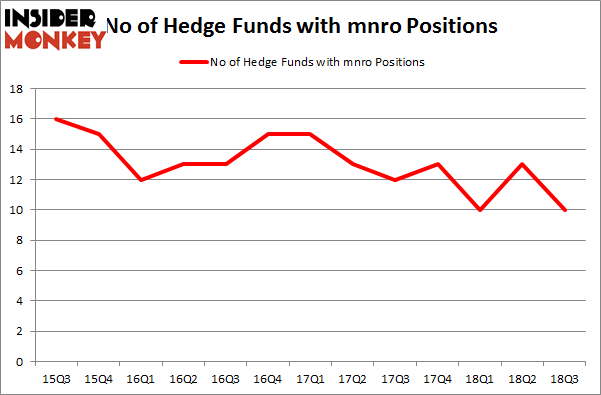 The largest stake in Monro, Inc. (NASDAQ:MNRO) was held by Arlington Value Capital, which reported holding $115.3 million worth of stock at the end of September. It was followed by Royce & Associates with a $27.7 million position. Other investors bullish on the company included Diker Management, Two Sigma Advisors, and Maverick Capital.

Judging by the fact that Monro, Inc. (NASDAQ:MNRO) has faced declining sentiment from the aggregate hedge fund industry, logic holds that there lies a certain “tier” of hedge funds who were dropping their full holdings by the end of the third quarter. Intriguingly, Anthony P. Brenner’s Pivot Point Capital dropped the largest investment of all the hedgies tracked by Insider Monkey, totaling about $6.2 million in stock. Dmitry Balyasny’s fund, Balyasny Asset Management, also dropped its stock, about $0.9 million worth. These transactions are intriguing to say the least, as aggregate hedge fund interest dropped by 3 funds by the end of the third quarter.

As you can see these stocks had an average of 16.25 hedge funds with bullish positions and the average amount invested in these stocks was $298 million. That figure was $171 million in MNRO’s case. Amicus Therapeutics, Inc. (NASDAQ:FOLD) is the most popular stock in this table. On the other hand Transportadora de Gas del Sur SA (NYSE:TGS) is the least popular one with only 9 bullish hedge fund positions. Monro Inc (NASDAQ:MNRO) is not the least popular stock in this group but hedge fund interest is still below average. This is a slightly negative signal and we’d rather spend our time researching stocks that hedge funds are piling on. In this regard FOLD might be a better candidate to consider a long position.

Should You Avoid Innospec Inc. (IOSP)?