Is Meredith Corporation (NYSE:MDP) a good place to invest some of your money right now? We can gain invaluable insight to help us answer that question by studying the investment trends of top investors, who employ world-class Ivy League graduates, who are given immense resources and industry contacts to put their financial expertise to work. The top picks of these firms have historically outperformed the market when we account for known risk factors, making them very valuable investment ideas.

Meredith Corporation (NYSE:MDP) shares haven’t seen a lot of action during the second quarter. Overall, hedge fund sentiment was unchanged. The stock was in 11 hedge funds’ portfolios at the end of the second quarter of 2019. The level and the change in hedge fund popularity aren’t the only variables you need to analyze to decipher hedge funds’ perspectives. A stock may witness a boost in popularity but it may still be less popular than similarly priced stocks. That’s why at the end of this article we will examine companies such as YETI Holdings, Inc. (NYSE:YETI), Guangshen Railway Company Limited (NYSE:GSH), and PROS Holdings, Inc. (NYSE:PRO) to gather more data points. Our calculations also showed that MDP isn’t among the 30 most popular stocks among hedge funds (view video below).

In the financial world there are dozens of signals stock traders put to use to assess publicly traded companies. Some of the best signals are hedge fund and insider trading interest. Our researchers have shown that, historically, those who follow the top picks of the top hedge fund managers can beat the S&P 500 by a very impressive amount (see the details here). 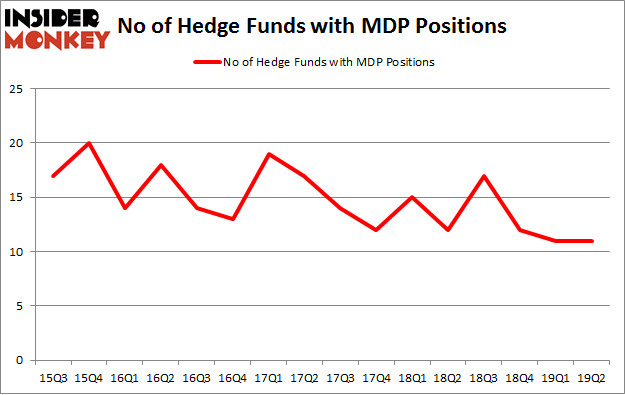 More specifically, Royce & Associates was the largest shareholder of Meredith Corporation (NYSE:MDP), with a stake worth $120.9 million reported as of the end of March. Trailing Royce & Associates was Ariel Investments, which amassed a stake valued at $75.9 million. GAMCO Investors, MFP Investors, and Citadel Investment Group were also very fond of the stock, giving the stock large weights in their portfolios.

Due to the fact that Meredith Corporation (NYSE:MDP) has faced a decline in interest from the entirety of the hedge funds we track, it’s safe to say that there exists a select few money managers that elected to cut their full holdings last quarter. Interestingly, Frederick DiSanto’s Ancora Advisors dumped the biggest position of the “upper crust” of funds watched by Insider Monkey, totaling an estimated $3.8 million in stock. Dennis Leibowitz’s fund, Act II Capital, also dropped its stock, about $1.7 million worth. These bearish behaviors are interesting, as aggregate hedge fund interest stayed the same (this is a bearish signal in our experience).

Let’s go over hedge fund activity in other stocks – not necessarily in the same industry as Meredith Corporation (NYSE:MDP) but similarly valued. We will take a look at YETI Holdings, Inc. (NYSE:YETI), Guangshen Railway Company Limited (NYSE:GSH), PROS Holdings, Inc. (NYSE:PRO), and 2U Inc (NASDAQ:TWOU). This group of stocks’ market valuations are similar to MDP’s market valuation.

As you can see these stocks had an average of 10.75 hedge funds with bullish positions and the average amount invested in these stocks was $91 million. That figure was $271 million in MDP’s case. PROS Holdings, Inc. (NYSE:PRO) is the most popular stock in this table. On the other hand Guangshen Railway Company Limited (NYSE:GSH) is the least popular one with only 1 bullish hedge fund positions. Meredith Corporation (NYSE:MDP) is not the most popular stock in this group but hedge fund interest is still above average. This is a slightly positive signal but we’d rather spend our time researching stocks that hedge funds are piling on. Our calculations showed that top 20 most popular stocks among hedge funds returned 24.4% in 2019 through September 30th and outperformed the S&P 500 ETF (SPY) by 4 percentage points. Unfortunately MDP wasn’t nearly as popular as these 20 stocks and hedge funds that were betting on MDP were disappointed as the stock returned -32.5% during the third quarter and underperformed the market. If you are interested in investing in large cap stocks with huge upside potential, you should check out the top 20 most popular stocks among hedge funds as many of these stocks already outperformed the market so far this year.