The Insider Monkey team has completed processing the quarterly 13F filings for the September quarter submitted by the hedge funds and other money managers included in our extensive database. Most hedge fund investors endured a torrid quarter, which certainly propelled them to adjust their equity holdings so as to maintain the desired risk profile. As a result, the relevancy of these public filings and their content is indisputable, as they may reveal numerous high-potential stocks. The following article will discuss the smart money sentiment towards LogMeIn Inc (NASDAQ:LOGM).

LogMeIn Inc (NASDAQ:LOGM) has experienced a decrease in support from the world’s most elite money managers of late. LOGM was in 29 hedge funds’ portfolios at the end of the third quarter of 2018. There were 30 hedge funds in our database with LOGM holdings at the end of the previous quarter. Our calculations also showed that LOGM isn’t among the 30 most popular stocks among hedge funds.

According to most traders, hedge funds are viewed as unimportant, old financial vehicles of yesteryear. While there are greater than 8,000 funds trading at the moment, We look at the moguls of this club, approximately 700 funds. These hedge fund managers have their hands on the majority of all hedge funds’ total asset base, and by monitoring their inimitable investments, Insider Monkey has brought to light various investment strategies that have historically outstripped the broader indices. Insider Monkey’s flagship hedge fund strategy outrun the S&P 500 index by 6 percentage points per annum since its inception in May 2014 through early November 2018. We were able to generate large returns even by identifying short candidates. Our portfolio of short stocks lost 24% since February 2017 (through December 3rd) even though the market was up nearly 23% during the same period. We just shared a list of 11 short targets in our latest quarterly update.

How have hedgies been trading LogMeIn Inc (NASDAQ:LOGM)? 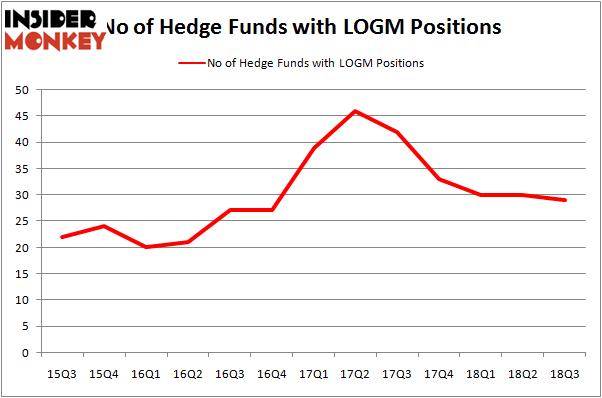 Since LogMeIn Inc (NASDAQ:LOGM) has experienced falling interest from the entirety of the hedge funds we track, it’s easy to see that there exists a select few fund managers that decided to sell off their full holdings in the third quarter. Interestingly, Farallon Capital dumped the largest position of all the hedgies tracked by Insider Monkey, totaling close to $214.1 million in stock. Leon Shaulov’s fund, Maplelane Capital, also dropped its stock, about $10.3 million worth. These transactions are important to note, as total hedge fund interest fell by 1 funds in the third quarter.

As you can see these stocks had an average of 29 hedge funds with bullish positions and the average amount invested in these stocks was $657 million. That figure was $537 million in LOGM’s case. Coupa Software Incorporated (NASDAQ:COUP) is the most popular stock in this table. On the other hand Nu Skin Enterprises, Inc. (NYSE:NUS) is the least popular one with only 18 bullish hedge fund positions. LogMeIn Inc (NASDAQ:LOGM) is not the least popular stock in this group but hedge fund interest is still below average. This is a slightly negative signal and we’d rather spend our time researching stocks that hedge funds are piling on. In this regard COUP might be a better candidate to consider a long position.